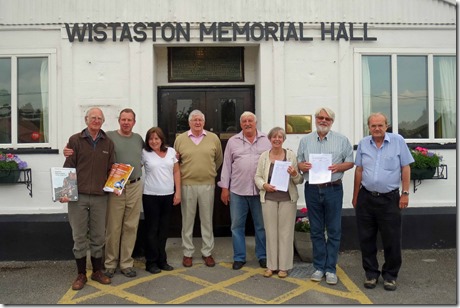 Gladman Developments Ltd have outraged Wistaston residents by submitting a planning application to Cheshire East Council for 325 on land adjacent to Joey the Swan.  The land is known locally as Witters Field.  It has a public footpath running through it and has been used by locals for recreational purposes for generations.
Wistaston residents recently formed "Hands off Wistaston" (HOW) an Action Group to fight off the Developers.

"Now is the time when we need Wistaston residents to join forces and let Cheshire East Council know what we think of this application.  We are asking them to go on to the Cheshire East website www.cheshireeast.gov.uk and make their views known.  The planning application number is 13/2649N.  There are already a number of objections registered and the application only came to light on Thursday 4th July."
Wistaston Parish Councillor Derek Millington says;

"It is really important that residents do send in their objections.  Locally we know the strength of feeling against the threat of housing on this particular field.  We need Cheshire East Council and its Planning Committee to get this message loud and clear.  If residents can't object via the Internet they can write to; Daniel Evans, Principal Planning Officer, Development Management, PO Box 606, Municipal Buildings, Earle Street CREWE. CW1 9HP"
Margaret Simon, Cheshire East Councillor for Wistaston Ward says;

"It is important that the local community get involved in the consultation for this outline planning application.  They need to get behind the representatives who are trying their absolute best to help them.  In the last few weeks Hands off Wistaston, the Parish Council and we, as Ward Councillors, have been encouraging residents to respond to the latest consultations on the Additional Sites for the Local Plan.  A staggering 555 people responded sending a clear message to Cheshire East that large housing developments are not wanted in Wistaston.  Also already over 1300 signatures have been obtained locally on a petition to 'Protect existing Green Gap Land in the Crewe and Nantwich area from development.' The efforts of Hands off Wistaston and Wistaston Parish Council have been magnificent so far, so please Wistaston residents join them and have your say."
Pictured - members of HOW and Wistaston Parish Council
Best regards,
Margaret
Margaret Simon
Cheshire East Councillor for Wistaston Ward Member of Cheshire Fire and Rescue Authority
Tel: 01270 651582
Email: margaret.simon@cheshireeast.gov.uk