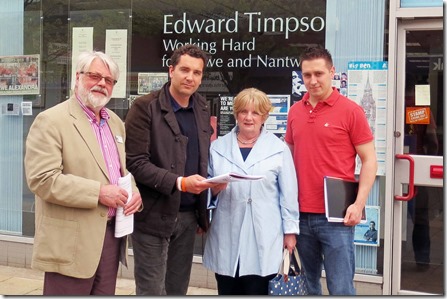 Wistaston representatives have met with local MP Edward Timpson to discuss with him the perceived impact of the three major housing developments that have been proposed for the parish in recent weeks.  These would cover every available green field that separates Wistaston from Crewe and Willaston.

Cheshire East Wistaston Ward Councillor Margaret Simon, Wistaston Parish Councillor Derrick Millington and Hands off Wistaston representative Graeme Worrall were able to convey to Edward Timpson their concerns and fears about the creeping urbanisation into the village.  Effectively, if all the development was to take place, Crewe, Wistaston and Willaston would be joined together.  Concerns were also shared with Edward Timpson regarding the threat to the existing Green Gaps, a Policy developed by the former Crewe and Nantwich Borough Council to retain green fields between village which helps them to retain their identity.

“Whilst planning is the responsibility of the Council and as an MP I have no direct influence over the planning process, I do fully support the Wistaston Ward Councillors Margaret Simon and Jacquie Weatherill,  Wistaston Parish Council and the community group Hands off Wistaston in their efforts to stop these unwanted planning proposals.  I believe that the existing Crewe and Nantwich Green Gaps should be retained in their entirety.”

“It is important to the Community to know that their MP is right behind them when they feel very strongly about something that will affect their daily lives and these proposals could see Wistaston, as we know it, disappear”.

“Edward Timpson listened very carefully to what we all had to say and we were able to explain just what these proposals meant to the people of Wistaston.”

“Members of Wistaston Parish Council know that this threat of massive housing developments is of great concern to residents and we are doing everything in our power to support them.  Knowing that we also have the support of our MP and Ward Councillors is very reassuring”.