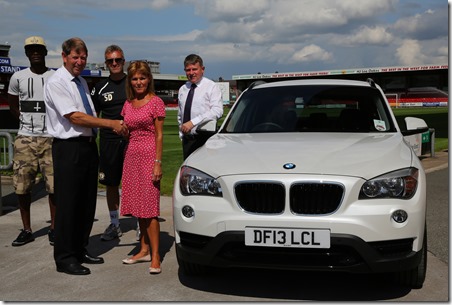 Barry Holt, Dealer Principal at Blue Bell BMW Crewe, commented: “We’re delighted to renew our sponsorship, ahead of what is set to be a thrilling 2013/2014 season, hot on the heels of last year’s sensational Wembley cup victory.

“We have always had an excellent relationship with the Club, which like ourselves, prides itself on offering impressive performance and celebrating the very best of local talent.

“Many of our employees and customers are firm supporters so we wish the playing staff and Manager Steve Davis all the very best for the new League One season.”

Alison Bowler, Crewe Alexandra’s Business Operations Manager, commented: “We are delighted that Blue Bell has continued with their sponsorship.

“Blue Bell BMW and MINI have supported us for more than 15 years, and during that time we have built up close links with the dealership, and look forward to working with all at Blue Bell during what will be an exciting season."