A few months ago at the end of Leighton St which connects to a mother and baby unit for new born babies people started dumping rubbish. This was bags of rubbish often containing rotting food and dirty nappies and often it contains maggots and flies.

As there are lots of new born babies at the unit it must be a health risk so I went to environmental health to report it they stated it was nothing to do with them. But if there are flies and maggots with new born babies feet away it is a health issue I explained but they wouldn’t do anything other than contact the wardens.

The wardens turned up and looked at the rubbish and said its none English and in their country they throw rubbish out in the backs and someone collect it. But I explained they are now living in the UK the warden claimed there are no laws in Cheshire east for them to prosecute anyone for dumping rubbish or fly tipping. On one occasion the rubbish was set on fire very close to a car as people were fed up with it its very luck no one was killed.

It is now a regular thing with the council removing it and with 24 hours there are often 20 bags there again. This is costing the tax payer for a van to come and collect this rubbish. With warm weather on the way the danger is there will be more flys and maggots not to mention danger from rats and other vermin. The council need to trace all these people and if they continue to dump it then there must be a way to get them into court. 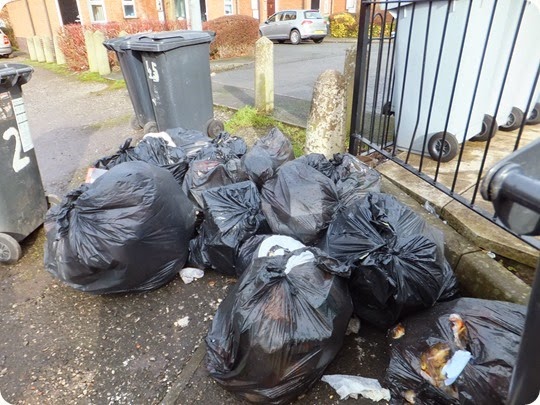