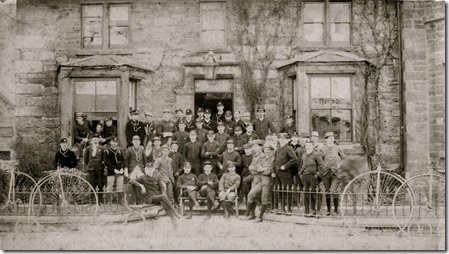 Work will begin in June at Cheshire Archives and Local Studies with a team of volunteers from the Anfield Bicycle Club to make the treasures of its 134-year history accessible to new audiences.

The Club has received £16,000 from the Heritage Lottery Fund for their ‘Your Heritage’ project: ‘Those Amazing Anfielders and their Cycling Machines in Peace and War’.

The Anfield Bicycle Club, formed in March 1879, spans the history of cycling itself. Early members, like prolific record breaker George Pilkington Mills, pioneered the new sport of long distance cycling. The ‘Anfield 100’, first run in 1889, is the oldest surviving cycling event in the world. This year’s took place on Bank Holiday Monday, May 27.

Like a diary kept by many, the club’s circulars, year books, photographs, minute books and race cards tell remarkable stories of record-breaking racing and distinguished service in two World Wars. The First World War Roll of Honour records that 41 members – a third of the membership – served and four were killed. The family who suffered most were the Rowatts. Of founder member DC Rowatt’s five sons, one was wounded, two were killed within a month at the Somme, another died in the 1918 flu pandemic and polio claimed one more in the 1920s.

Anfield BC volunteers, trained and hosted by Cheshire Archives and Local Studies, will carry out scanning of documents and images before the collection is deposited at the Record Office in Chester for permanent preservation. The new digital collection will be accessible on the club’s website.

Anfield Bicycle Club project leader and past president David Birchall said: “I am delighted that the richness of the archive will now be conserved, and made available for all to share. I am very grateful to Cheshire Archives and Local Studies for their help in supporting the successful Heritage Lottery Fund bid.”