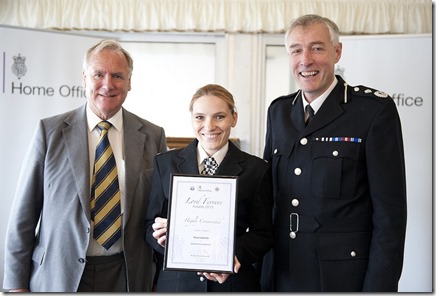 Cheshire’s Volunteers and Special Constables are in the national spotlight after being recognised at this year’s Lord Ferrers Awards. The annual event held at the Houses of Parliament this week, saw Denise Rogers win the Police Support Volunteer Individual category and Ewa Labeda receive a Highly Commended certificate in recognition of her work as a Special Constable.

Denise was nominated for the award due to her work on the multi-agency programme ‘Think, Drive, Survive’, which aims to educate young people about the consequences of poor driver and passenger behaviour and promotes safer, more responsible attitudes towards road use.

Denise became a volunteer with Cheshire Police in 2006, following the tragic death of her son Paul in a road traffic collision to a fail to stop drink driver in 2003. Since joining the team, Denise has attended in excess of 180 courses and presented to approximately 10,000 students.

Ewa was recognised at the awards ceremony for her outstanding work as a Special Constable within the Polish community and was runner-up for the Individual Ferrers Trophy.

Originally from Poland, Ewa started as a police staff member on October 2006 and became a Special Constable in April 2010. She has been instrumental in breaking down language barriers and developing initiatives to enhance the relationship between the police and the Polish community. Initiatives include setting up Polish speaking help lines and drop in surgeries in the heart of the community. Her translation skills have also been used extensively to enable colleagues to gain a better understanding of community issues.

Speaking about the awards, Home Secretary Theresa May said:

"Special Constables and police volunteers make a huge contribution to local policing sharing their time, talent and skills for the benefit of their community".

Police and Crime Commissioner John Dwyer praised the work of the volunteers:

"I was delighted to attend the event and see Denise win her award and Ewa receive her certificate. Both of these ladies have done an excellent job in helping to make Cheshire a safer place to live. These awards reinforced my belief that they are many exceptional people out there willing to give their time and make a huge difference to their local or wider community and I would encourage anyone thinking of volunteering to help the police family to do just that".

For information on volunteering opportunities and how to get involved with Cheshire Police, please visit the website; http://www.cheshire.police.uk/get-involved.aspx