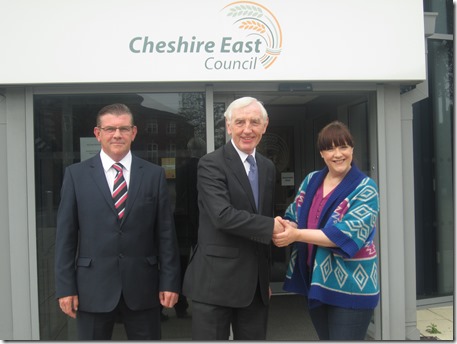 The former Conservative Councillor, who has served for 37 years, has made his decision because of his belief it is "time for fresh start" in the area.

Cllr Silvester, who represents the Willaston and Rope Ward, has been formally welcomed to UKIP by Cheshire chair Cllr Louise Bours.

"UKIP are the opposition in Britain today, and councillors are crossing over to us because in our party they are free to serve the people within their communities rather than  'toeing the party line'.

"In the past week I have welcomed district and borough councillors from Cumbria and Lancashire, it is wonderful to now welcome a councillor from Cheshire too,"   she said.

Councillor Richard Lee said "we welcome Brian to the Crewe and Nantwich Branch, and look forward to working with him. He will continue to serve his constituents in the Willaston and Rope ward, and will be a valuable addition to the branch."

Cllr Silvester explained, "I am joining UKIP because I think it is time for a fresh start in Cheshire East with a new party.

"Since the new Council was formed in 2009 it has reeled from one disaster to another. The current Conservative leadership of the Council is treating local electors with contempt. They believe that they  will get re-elected no matter how many times they ignore the concerns of local residents. or damage  their interests.

"UKIP are now a recognised powerful alternative to the LibLabCon parties. UKIP have shown nationally they can pick up votes from all the three old parties and also win votes from those who given up on politics because the other three main parties are now all the same.

"In 2015 UKIP across Cheshire East will be a viable alternative  that voters can unite behind to throw out  those councillors who have let them down so badly.

"Nationally I have been appalled that the coalition government has failed to get the economy growing again and the Labour opposition does not have a credible alternative.

"As a consequence of their failure local unemployment is too high and local businesses are not growing as they could. Also all three parties have reneged on their promise to hold a referendum on  the European Union's Lisbon Treaty. It is time that once again this country was run by us and not by the EU. UKIP are the only party who can and will deliver on that because the other parties cannot be trusted to keep their promises.

"There is now little difference to the three main parties and UKIP is the only really viable alternative. The LabLibCon parties do not listen to ordinary people and on the rare occasions they do listen, they patronise them.

"More and more people are saying enough is enough. UKIP is a breath of fresh air and they are gathering momentum by the day with the voters. The recent elections in Congleton and Crewe show this.

"I believe that UKIP will become a major force on the Cheshire East Council after the 2015 elections.  I would urge members of the other groups on the council to consider joining the UKIP group and be part of the fresh start for Cheshire East," said Cllr Silvester.