Connecting Cheshire gets off to a Superfast start 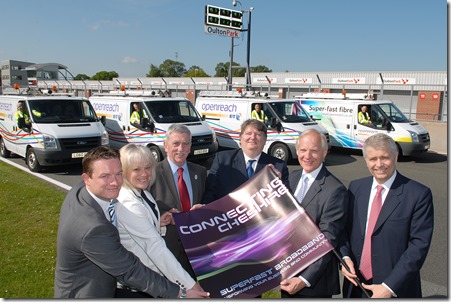 The £28.5m project to bring superfast broadband to Cheshire was officially launched on the start line at the Oulton Park race circuit at Tarporley.

By 2016 over 96 per cent of Cheshire premises will be able to access high-speed fibre broadband making the county one of the best connected regions in the UK.

Over 100 community Digital Champions attended the event at Oulton Park to hear how the new fibre network will be rolled out to rural premises and build on the networks already available in urban areas.

The Connecting Cheshire Partnership of the four Cheshire councils and BT has secured European, local and central government funding to provide additional rural broadband infrastructure to over 80,000 premises that will build on BT’s on-going commercial investment in fibre across the county.

As a result more than 400,000 premises (around 96 per cent) across Cheshire, Halton and Warrington, should have access to broadband speeds of up to 80Mbps[i] by the end of 2016.

Those premises in the remaining four per cent that currently experience low speeds will also see an improvement, as the project aims to deliver a minimum of 2Mbps or more to almost all homes and businesses.

The funding for the infrastructure elements of the project will be made up of a BT contribution of £9m towards fibre deployment in non-commercial areas while The Connecting Cheshire Partnership is contributing £1.85m, with a further £4m coming from the Government’s Broadband Delivery UK (BDUK) funds and £13.6m from European Regional Development Funds (ERDF)[ii].

Councillor Michael Jones, Leader of Cheshire East Council, said “This event provided the opportunity to thank our Digital Champions for their hard work in helping to raise awareness of the poor speeds currently available in our rural areas and encouraging residents and businesses to register their demand with us.

“They have helped secure more than 8,000 registrations over the past year and without their support we would not be launching the project.

“Faster broadband speeds will make a huge difference to everyone, so please bear with us as we start work with BT to undertake the complex planning and surveying of Cheshire in order that we can deploy the network efficiently and speedily from early next year.”

Connecting Cheshire expects to be able to announce which communities will be included in the first stage of the roll-out during December 2013. Connecting Cheshire and BT will work together to prioritise a strategic roll-out so that the whole county’s best interests are served.

Bill Murphy, BT’s managing director of next generation access, said: “The roll-out of the fibre network for the Connecting Cheshire project will be fast and aggressive. BT will be building a network that offers people across the county both choice of supply – and some of the most competitive prices in Europe.”

For more information on the Connecting Cheshire Project visit www.connectingcheshire.org.uk