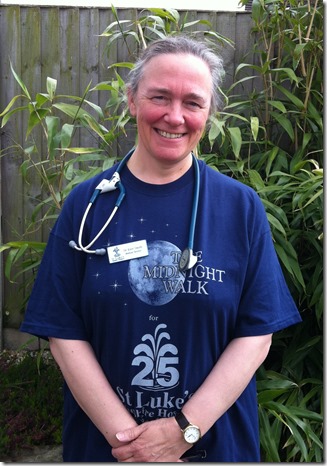 “I decided that I wanted to be a doctor from the age of about 6-7. I think I originally wanted to go into space but even at that tender age I realised that there was a lot of physics involved in being an astronaut, but they were bound to need doctors in space so I’d do that instead! Reality eventually took over and I followed the standard medical route, which I have never regretted.

My first links with St Luke’s Hospice were in 1988 when I was working as a GP in Winsford. Edith Reeves (our first matron who I’d known from Leighton Hospital) phoned me one day and asked if I would be a volunteer doctor providing emergency cover when the Day Hospice opened in February that year, so this is my 25th anniversary at St Luke’s.

As anyone who works here will know, you gradually get drawn into the place, and so it happened to me. When the In-Patient unit was built, it was suggested that I apply for the post of Medical Director, which I did, and was successful – I have been in the job since October 1990. I think coming to work here was one of the best decisions I have made. From my time in the hospital I realised that the care provided for people at the end of their lives seemed to have a lower priority than trying to cure them, and death was seen as something of a failure. I felt very strongly that there must be a better way to do things and this was something that I could do.

It is a real privilege to be allowed into peoples’ lives at such a sensitive time, and we all become a team working together – not just the clinical staff, but the people who come to us as patients and their relatives and their friends. And also on the frontline are the catering and housekeeping staff, and behind the scenes administration and fundraising, all helping to keep St Luke’s running smoothly.

We know there are more people needing the sort of palliative care that St Luke’s provides than we can accommodate here, and also that a lot of people will want to stay in their own homes, so together with the education team, we help the staff in the hospitals, care homes and in the community to learn more about symptom management and how to improve care for patients in the advanced stages of their illness.

This is the first year that I have done the Midnight Walk, but I felt that as it was St Luke’s 25th anniversary and my 25th year here as well that it seemed like a good idea. Also, I have been keeping a bit fitter this year, and have lost quite a bit of weight, so the hips and knees aren’t quite so achy! My main exercise is swimming, but since I’ve been practising for the walk I have realised that the muscles used in swimming are not the same as those used in walking!

I live in Middlewich and I’m doing a lot of walking along the canal towpaths, discovering bits of the town I never knew existed. You can soon feel you are out in the middle of the countryside, and by walking you see much more of the wildlife – I spotted my first swallows of the year the other day! People you meet out walking are all friendly and so are their dogs.

If you have ever considered taking part in the Midnight Walk for St Luke’s Hospice, why not take the plunge and do it this very special year? If you think 13 miles is too much, then you can do the Half Moon walk (6.5 miles) this is a bit more manageable (it’s what I’m doing!). Whichever walk you choose, you will know that you are part of a fantastic friendly team raising funds to support a very special place.”

If you would like to support Dr Kate’s walk, you can sponsor her here http://www.justgiving.com/Kate-Smith30

You can sign up for St Luke’s Midnight Walk atwww.midnightwalk.co.uk