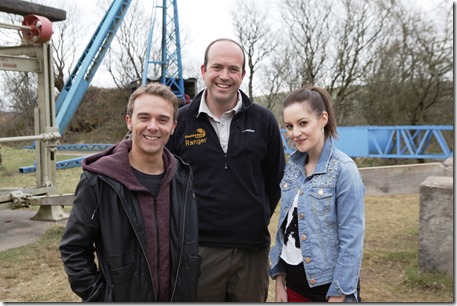 One of Cheshire East’s crowning jewels was the backdrop for a dramatic upcoming episode of popular soap Coronation Street.

ITV shot some gripping scenes at picturesque Tegg’s Nose Country Park, near Macclesfield, in which character David Platt threatens to jump to his death after discovering his unborn baby may not be his.

In the episode, to be screened on Wednesday, June 19, at 7.30pm, David (played by Jack P Shepherd) considers jumping off a cliff after discovering his wife Kylie (Paula Lane) had a one-night stand with his brother Nick Tilsley (Ben Price).

The hill at Tegg’s Nose proved to be the ideal spot for the film crew, who spent the day with Cheshire East Council’s ranger service to ensure filming went smoothly.

Councillor David Topping, Cabinet member in charge of the environment, said: “Coronation Street is a national institution, so to have them filming here in Cheshire East is an absolute pleasure.

“They picked a very good location in Tegg’s Nose, which offers breathtaking views and great opportunities to enjoy a good stroll through the countryside.

“Our rangers do a fantastic job and I am pleased to see they are again getting recognition for their work in preserving Tegg’s Nose as a real gem in the Cheshire East countryside.”

Tegg’s Nose is a popular choice for all manner of different events. Recently it was featured in the national media for hosting a miniature library, where walkers can relax and read books while sitting at the top of the hill at the country park.

It also hosts regular ‘public star parties’ in which amateur astronomers of all ages meet to discuss the wonders of the galaxy. These are organised by the Macclesfield Astronomical Society (www.maccastro.com).