Cheshire Police make a grand entrance at the show 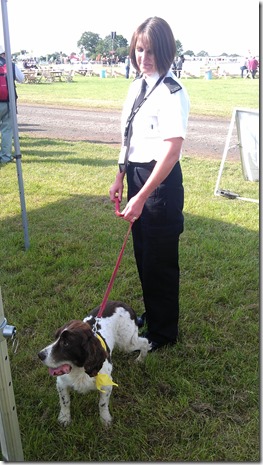 As the sun shone down on this year’s Cheshire Show, staff on the Cheshire Police exhibition had a productive two days communicating key crime prevention messages and highlighting new initiatives to thousands of children and adults that visited their stand at the show. The exhibition offered something for everyone from informative fun activities for the children, explaining and enrolling people on to the new Police Alert system, to the recruitment of Special Constables and Police Volunteers, and as popular as ever was the meet and greet with the Constabulary’s four legged friends, the police dogs.

With more than 80,000 visitors expected over the two days − 18th and 19th June, staff were kept busy talking and interacting with everyone who came to the stand and who wanted to know more about policing.

Over the course of the two days, over one thousand children took part in solving clues to identify the suspicious character involved in a young girl’s disappearance. Addressing the serious issue of on-line crime, the youngsters put their detective skills to the test in the internet café area. Officers, staff and volunteers were able to talk to them about staying safe online during this activity and drive home the message about being aware that not everyone is who they say they are online.

A teacher from Hermitage Primary in Holmes Chapel commented on the activity stating ‘what a great way to warn children of the risks from a young age because many youngsters do have access to the internet.’

The show provided a platform to launch some of the new initiatives which included ‘Neighbourhood Alert’ − a new messaging service for the public, ‘Do Something Special’ tailored to the recruitment of Specials and volunteers as well as ‘Am I in Your Blind Spot’ where farmers and motorcyclists were targeted about the dangers on rural roads of people being in blind spots. Free tractor mirrors were handed out to farmers along with DVDs to support the campaign launch.

Sergeant Rick Weaver, Road Policing Unit who leads on ‘blind spot’ said "We recognised the need for a campaign that would focus on rural road safety. Following some research, I was able to source a ‘blind spot’ mirror that could be fitted to any existing tractor mirror. This affords the tractor driver extended views to the rear and more importantly a clear view behind when negotiating a right turn into farm entrances or fields."

Road safety officers provided a visible presence outside the police tent with the ‘Think Car’ − which was donated to the emergency services by a Cheshire family whose son was tragically killed in a drink drive collision. The car was a real draw to the Constabulary’s exhibition attracting people of all ages where police officers were able to really engage people in discussions about drink, drug driving and the dangers that drivers can face on rural roads. The police officer’s message was reinforced by the parents of the young man that was killed in the collision, Dean and Dee Wilson who talked to people and told their story of how their lives had changed as a consequence of the collision. Their message really struck a chord with the crowd.