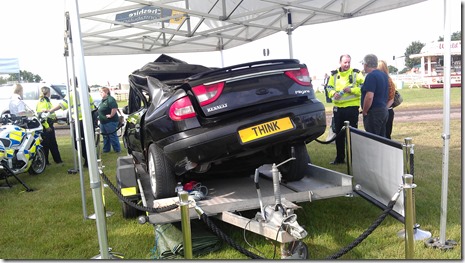 As the ‘Think’ car continues to make its way around the county as part of the Summer drink drive campaign being supported by Cheshire Police, it draws the crowds from passers by of all ages who reflect on its personal consequences. The car was donated by a Cheshire family whose son was tragically killed over two years ago in a drink drive collision and has appeared at venues across Cheshire as well as featuring on national TV.

Its latest appearance at Cheshire Show on 18th and 19th June was further reinforced by the attendance of the parents − Dean and Dee Wilson, who were guest speakers to talk about the consequences of drink driving. As their son was approaching his 22nd birthday, the car is ideally placed at schools and universities to target younger people, but at Cheshire Show, there was the opportunity to interact with parents of young teenagers who drive.

Tony Hayhurst, Road Traffic Officer and Dave Murray, Road Safety Officer for Cheshire Police were also at the show to talk to the public about the ‘Think’ car and educate them to the risks of drink driving. Dave who has worked in road policing for over 20 years commented that "This vehicle provides a great opportunity to show people of all age groups just how little alcohol it can take to put someone over the limit.  The courage and bravery of the driver’s family who support the use of the ‘Think’ car in this way can only be admired.

"It offers a degree of comfort that something positive can be achieved from such tragic circumstances. We really need to get the message across that any amount of alcohol is a risk in terms of driving and that it can take a surprisingly low amount of alcohol to be over the limit and this is the most effective way to do that."