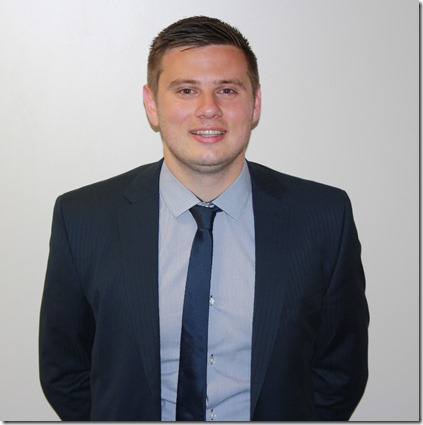 Police & Crime Commissioner, John Dwyer is pleased to announce that he has appointed Dominic Rogers as Youth Ambassador for the young people of Cheshire.

Dominic, aged 23, has previous experience in working with young people with special needs and emotional and behavioural difficulties as a learning support assistant at a Cheshire High School, in youth centres with school refusers and as a football coach.

Dominic said, "The selection process to become Youth Ambassador was rigorous and included a presentation to a panel of 8 young people who were very challenging in their questions. There was also an interview with a panel of 5 people which included the Police & Crime Commissioner and the Head of Warrington, Halton and Cheshire Youth Offending Services. I feel that the experience and skills that I have developed working with young people and adults will allow me to be successful in the role."

John Dwyer said, "I have been criticised by some for seeking to make this appointment but I developed the role profile and job description with partner organisations such as Youth Offending Services, Catch 22, Youth Groups and local councils. I also sought the views of young people themselves and it is clear to me that I need someone to represent the voices of the 23% of the population in Cheshire who are under 18 (almost 238,000 residents). Recent events have made me reflect on the need for the appointment and I am conscious that young people facing difficult circumstances and those at risk from harm need a way to make themselves heard. I feel that the money being invested in the salary of the Youth Ambassador is public money being used to protect our young people and involve them in developing improvements to policing that we will all benefit from.

Young people are an often undervalued but important element of society and our future. During the last year, 7% of victims of crime in Cheshire were young people, that is 2,734 people from whom we can learn about their experiences with the police and make improvements in the service we offer in the future.

I want the Youth Ambassador to work with young people to prevent them from becoming victims by talking to them about personal safety, internet security, the dangers of online child exploitation, responsible attitudes to drugs and alcohol and driver safety amongst many other matters affecting young people today. This is not something that I could ask a volunteer to do. This is a full time role which asks for weekend and evening work with youth groups and organisations as well as working with schools and partners during the day.

I cannot personally commit the appropriate time to doing this myself with my other public engagement activity and I believe that this requires the experience of working with young people which Dominic brings.

Last year, there were 445 first time offenders entering the criminal justice system who were under the age of 18. I want the Youth Ambassador to work with young offenders to reduce re-offending and also understand what motivates them to turn to crime so that we can work with those young people who are identified as being on the brink of criminal activity.

The Youth Ambassador will be focussing on young people who are not in employment, education or training (NEETs). To add some context, the national average percentage of those aged 16-18 who are NEETs is 6.2%. In Warrington this percentage is 5.9%, in Halton 10.3%, in Cheshire West and Chester 4.9% and in Cheshire East it 5.5%.

Perhaps most importantly, Dominic will be an ambassador for young people and will assist and challenge me when I am developing my Police & Crime Plan to ensure that the views of young people are considered. This is vitally important in developing and shaping future policing services. This role gives young people a voice at the top of the service and a means by which I can effectively hold the Chief Constable to account. I am looking forward to working with Dominic in what will be a challenging but exciting role for him."