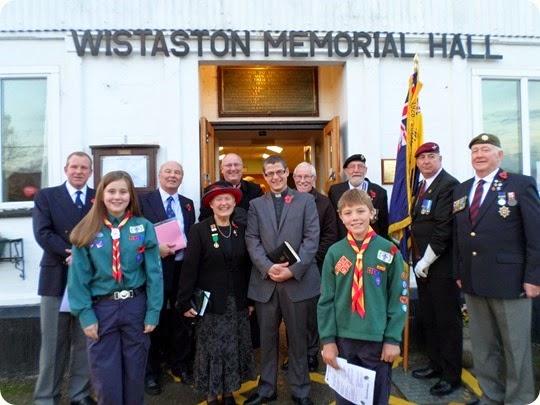 The Wistaston Memorial Hall and Community Centre was filled to capacity on Sunday 9th November 2014, as the village remembered those who made the ultimate sacrifice in the Great War 1914-18.

A guard of honour was organised by Beavers, Cubs and Scouts from the 35th South West Cheshire Scout group, who welcomed the Mayor of Crewe Councillor Pam Minshall, Cheshire East Councillors and Wistaston Parish Councillors.

The impressive poppy arrangement on the stage was displayed by Mrs Elizabeth Russell (Wistaston Flower Club).

The names of the sixteen men from Wistaston who perished during World War One, were respectfully read by Mrs Barbara Brereton.

The Wells Green Church choir, led by their musical director Mrs Myra Wood, added quality to the music and hymns.

A wreath was placed at the front of the building by the hall’s President, John Cooke, accompanied by George Edge-Robinson, who placed a cross in memory of Lieutenant Commander Roy Berryman Edwards DSO, sent by his daughter Mrs Sylvia Hammond, from Kent.

John White read a letter from the Commanding Officer to the parents of Second Lieutenant Stanley Fell Hutton who was killed in action on 11th April 1918, aged 24.

The collection at the service was £268 for the Royal British Legion.

As people arrived they were given a copy of 'Saint John's Gospel', which were given to servicemen during World War One.

Participants at the Service of Remembrance in Wistaston.JPG