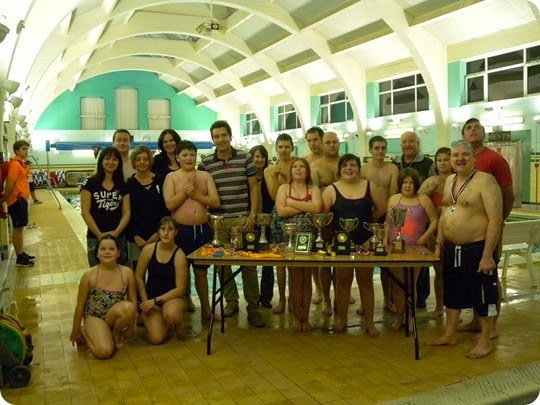 Crewe and Nantwich MP Edward Timpson made a special visit to Crewe Swimming Baths recently to congratulate members of the Seahorse Swimming Club who took part in the Halliwick Swimming Galas this year.

The club, which caters for people with disabilities, enjoyed success at the Regional Gala in September, winning a total of 12 medals, and several Seahorse swimmers qualified to represent the North West at the National Gala in Sevenoaks, Kent, in October.

Club secretary Gareth Roberts said: “It’s great to see Mr Timpson giving his time to visit and support community groups like Seahorse. Our swimmers felt proud of themselves and thrilled when he praised them for their success at the recent galas. As well as meeting club officials and families of the swimmers, Mr Timpson also gave encouragement to the swimmers who use the club as a means of leading a healthier lifestyle and for socialising with each other.”

Edward Timpson commented: "I've always enjoyed coming to watch the Seahorse swimmers in action and see how they've all benefited from the dedicated support of their volunteers and parents.

“To see so much silverware on display is a testament to the hard work everyone involved has put in to make the Club such a success!"

Seahorse is the oldest swimming club in Crewe, having been in existence since 1956. They rely on volunteer helpers to assist the swimmers, who have a variety of disabilities. They meet every Thursday evening at 7.00pm at the Flag Lane Swimming Baths. Anyone who would like to volunteer would be welcome, please contact Gareth on 01270 629958 for information.