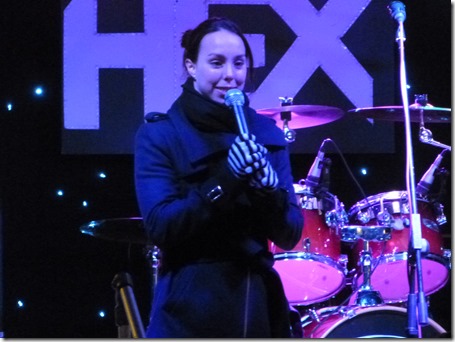 In the afternoon RedShift Radio - http://www.redshiftradio.co.uk/ - organised a lantern parade and samba band from Nantwich Market through the town. A Christingle Service took place at St Mary’s Church. Nantwich Market stallholders dressed themselves up in Victorian attire. Nantwich Bookshop featured a narrow-gauge steam railway in front of its premises and Santa setup his Grotto in their attic. Elsewhere there was a children's mini-funfair, festive stalls and refreshments. Nantwich Mayor Councillor Graham Fenton, led the countdown to the switch-on at 6.30pm, which was performed along with Olympic bronze medallist and three-time World Champion gymnast Beth Tweddle.

The switch-on was the cue for a spectacular firework display by local company Blitz Fireworks (http://www.blitzfireworks.com/), followed by an uplifting performance by local four-piece rock band Hex.

Despite the cold weather, several thousand people braved the elements to attend throughout the day.

Sue Togay (Town Centre Manager, Cheshire East Borough Council) said, “An amazing partnership between Nantwich Town Council and the traders, along with Blitz Event Solutions & Fireworks, has produced the best Christmas lights switch on we have had for many years. Many thanks to all those that have helped plan it and the wonderful people of Nantwich and the surrounding areas for coming along and supporting the town. We would like to wish you all a Merry Christmas and a happy and prosperous 2013.”