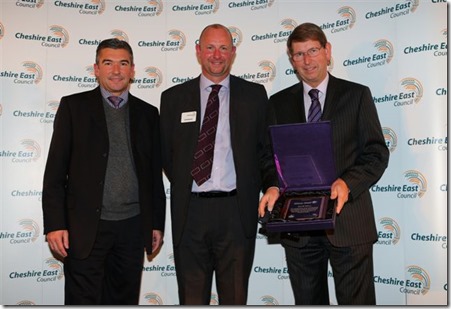 Blue Bell BMW Crewe has been honoured for its part in establishing the sporting legacy of 2012’s sensational Olympic and Paralympics Games in Cheshire East.

The dealership was presented with the special recognition award at the third prestigious Cheshire East Sport Awards, held at Cranage Hall on Thursday, 29 November, which looked back at a year of countless sporting triumphs across the area and of course the London 2012 Games.

Barry Holt, Dealer Principal at Blue Bell Crewe, was presented with the award which recognised the dealership’s ‘Outstanding Contribution Towards the Delivery of a Legacy for the London 2012 Olympics and Paralympics in Cheshire East’ by Cheshire East Council’s Leisure and Play Manager Geoff Beadle.

Also in attendance were 42 London 2012 Volunteers, both Games Makers and Ambassadors, who supported the delivery of London 2012 and received a medal in recognition of their efforts.

The BMW Group actively supported British athletes throughout the country during this summer’s Olympic Games, after being named the official automotive sponsor of London 2012.

In line with the BMW Performance Team initiative, before and during the Games, Blue Bell Crewe worked closely with local athlete Fran Halsall, who reached the final of the 50m and 100M Freestyle and both relay events in London.

Fran was provided with a cutting edge BMW Z4 as part of her sponsorship deal to assist her in meeting transportation needs for training, competitions and events.

Barry Holt, Dealer Principal at Blue Bell Crewe, said: “We are immensely proud to receive this recognition award however the real reward will be to see the success of the future sportsmen and women inspired by the truly sensational Olympic Games this summer.

“It has been a tremendous year and we at Blue Bell have been thrilled to support the Games and we will continue to support the sporting stars of the future who are already on the path to winning Gold at future Olympics.”