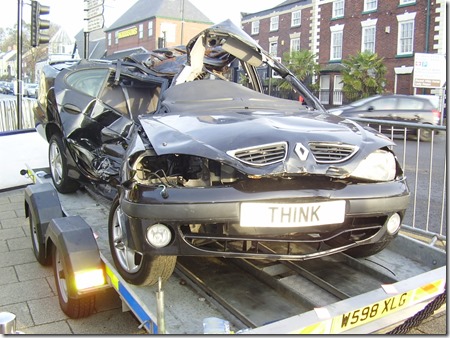 Cheshire Police will be out in force in the run up to Christmas to deliver road safety advice as part of its anti drink driving and drugs campaign and to target motorists who drive the morning after a night drinking.

As from November 30th, Cheshire road safety messages will be delivered through a series of initiatives across Cheshire and will run alongside a national campaign by ACPO (Association of Chief Police Officers) who this year are joining forces with THINK! − who form part of the Department for Transport to warn drivers that getting behind the wheel after a festive tipple could see them end up behind bars this Christmas.

ACPO today launched its anti-drink and drug driving campaign, warning that young drivers and people driving the morning after a night of drinking pose a huge risk. A hard hitting television advert highlighting the consequences of drink driving will also be shown throughout December as part of the THINK! Christmas drink drive campaign.

ACPO roads policing lead, Deputy Chief Constable Suzette Davenport, said: "If you don’t drink and drive this Christmas, you reduce the risk of killing an innocent person, or yourself. It really is that simple."

Last year, drivers aged between 20 and 24 failed more breath tests than any other age group so this year’s THINK! Christmas drink drive campaign is aimed at young people who are shown to be consistently over-represented in drink drive casualty figures."

ACPOs enforcement campaign targets well-intentioned drivers who do not think they are breaking the law but may be over the legal limit by the time they get into their cars in the morning. Police forces will be taking to roads across the county to stop and check drivers, where those found to be over the limit will face prosecution, which can lead to a jail sentence.

In conjunction with this, Cheshire Police will be running their own force wide winter drink and drug driving campaign which will be area specific to keep the roads safe. Road enforcement measures will include breathalyser checks across Cheshire and driving whilst using a mobile phone to crack down on irresponsible driving over the winter months. Last year’s winter drink driving campaign revealed that 175 arrests were made compared to 162 arrests in 2010, so there is a comparable increase in drink driving across Cheshire during the winter months.

Sergeant Rachel Gallagher of Cheshire Roads Policing Investigation Unit commented: "The message is clear − don’t drink and drive - if you have only had 2 large glasses of wine, that’s well over a third of the bottle so even if you may think you are ok to drive, do not take the risk. "

"And don′t forget the morning after, it′s all very well going out to a works Christmas party and staying over in a hotel but then it is possible that you will be over the drink drive limit the following morning. We are asking you to consider the consequences of your actions and the dangers you can pose to other motorists."

Rachel continues, "We are also asking for peer group pressure to be exerted on drink and drug driving over the winter period and not to get in a car as a passenger if you know for a fact that the driver has been drinking!"

Frank Lafferty, Road Traffic Officer also commented "If the possibility of causing death or injury to other people and to yourself isn’t enough to stop you, should consider the effects a drink-drive conviction would have on your life. If you are substantially over the alcohol limit when you are arrested, you will probably be looking at a three year driving ban and a fine of between a thousand and five thousand pounds. You may even go to prison for up to six months."

A series of winter drink drive events will also be delivered by the Cheshire Road Safety Group, which will include Cheshire Police. The ‘Think’ car - which a family donated to the emergency services over a year ago − will be used at the events, as a means to deliver road safety awareness to the younger generation. The driver of the car was a 21 year old man, who died on impact after losing control on a rural A-road. He was one and a half times over the legal alcohol limit but had not been speeding − the vehicle at impact was estimated to be only 43mph in a 60mph speed limit.

Saturday 8th December from 10.30am − 2pm, outside Marks & Spencer, Northwich

Wednesday 12th December from 9am − 2pm, Widnes market (but the Think car won’t be there)

Thursday 13th December from 10am − 4pm, Asda in Runcorn