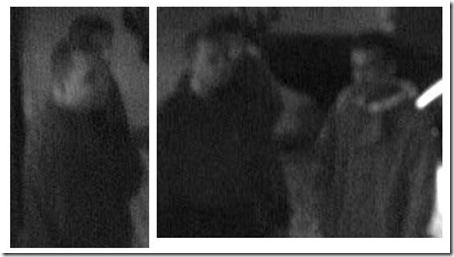 Crewe Police have released CCTV images of two men they would like to speak to in connection with an aggravated burglary in Crewe.

They burst into the bedroom and threatened a woman with a knife demanding cash. The offenders then searched the house and left through the front door with jewellery and cash.

The woman was not harmed but was shaken by the incident.

The first offender is described as in his mid 20s, 5ft 6 to 7ins tall with a thin build and light brown skin. He was wearing a dark hoodie with fitted jeans and dark ankle boots. He spoke English and Bengali.

The second offender is described as in his late 20s to early 30s, with a light skin tone. He had a trimmed beard with a small tuft. He wore dark clothing and had a distinctive black woollen hat. He wore a waist length jacket with a collar but no hood.

The third offender is described as in his mid 20s, 5ft 6ins tall with dark, short spiked styled hair. He was clean shaven and dressed all in black with black trainers which were possibly Nike. He also spoke Bengali and English.

Anyone with information should contact DC Kev Lloyd on 101 quoting incident number 956 of 11 November 2012. Alternatively information can be given anonymously by contacting Crimestoppers on 0800 555 111.