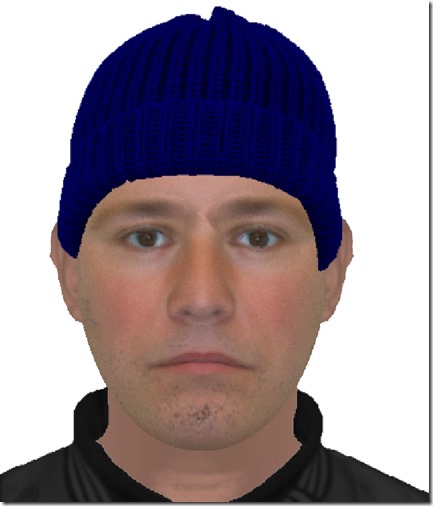 Police investigating a sexual assault in Crewe have released an efit of the suspect.

Two young girls were outside an address in Cranborne Road at around 8pm or 8.15pm on Sunday 4 November 2012 when an unknown man approached them to say he′d lost his dog.

The 9-year-old girl went with the man to look for his dog. The man hugged the girl and touched her inappropriately. The girl protested and ran to her home address to inform her family.

The man is described as white, possibly in his 30s with brown eyes and a slim build. He has an English accent and called himself Dave.

DS Jim Boulton said: "We have had no more incidents of this nature but we would urge parents to be vigilant and report any suspicious behaviour to police immediately. The little girl did the correct thing by telling her parents straight awaybut wewould urge parents to remind their children not to talk to strangers or go off with them.

"We are hoping that by releasing this efit someone may recognise or remember seeing someone in the area of this likeness and that it will prompt them to make contact with us with any information they have."

Anyone with information should contact DC Mike Rushton on 101 quoting incident number 890 of 4 November 2012. Alternatively information can be given anonymously by contacting Crimestoppers on 0800 555 111.