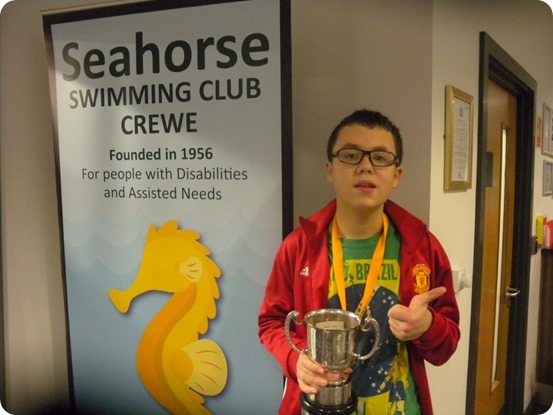 Crewe swimmer Zack Beeston won a gold medal at the Halliwick National championship at Sevenoaks, Kent, recently as part of the North West team who competed against swimmers from all over the UK.

Zack was one of ten swimmers from Seahorse Swimming Club, with many making their debut at national level. Three members of the team came away with medals and Seahorse chairman, Rob Dutton, was more than pleased with the Crewe swimmers.

All Seahorse swimmers, who made up the North West team, also deserve to be congratulated as they gave an excellent account of themselves. They competed with lots of effort and enjoyed the experience."

Seahorse, who are based at the Lifestyle Centre, are affiliated to the Halliwick Association of Swimming Therapy. The club encourages people with disabilities to gain confidence in the water, learn to swim and develop their skills.