The ‘35th World Worm Charming Championship’ - http://www.wormcharming.com/ - took place on the afternoon of Saturday 28th June 2014 within the grounds of Willaston Primary School http://www.willastonprimary.co.uk/ , Willaston, near Nantwich, Cheshire. The Championship started at 2pm and participants in each of the 144 plots had 30 minutes to collect as many worms as possible from their 3x3 metre plot. There were 'traditional' plots for teams of two and 'tag-team' plots for teams who wished to change their pairings throughout the charming period. Techniques included vibrating a garden fork, singing and playing a musical instrument.

The Chief Wormer's trophy for youngest wormer with 64 worms in plot 19 was won by 29 day old Arwyn Davies. 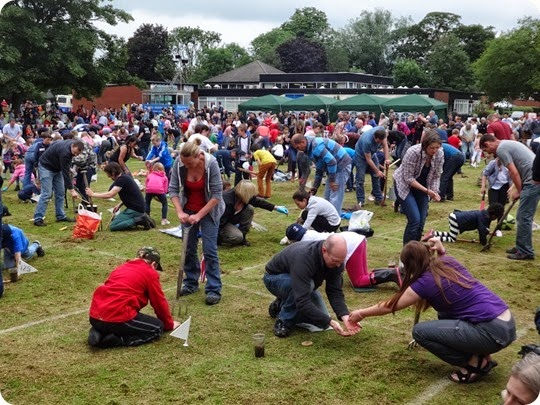 Most Promising Newcomer Award with 184 worms in plot 36 was won by Lucas and Melvyn Mostran.

The Heaviest Worm trophy was won by Liam and Patrick Martin in plot 27 with 5.84g.

The Championship trophy for Most Worms with an impressive haul of 394 worms in plot 83 was won by the Bowden’s with Dad Andy, son Dale and nine year old daughter Georgia. Mum provided verbal support. They live in the village of Tarleton near Preston and it was the second year running that they had competed in the Championship. Once presented with their trophy they were filmed and interviewed by a news crew from Russian 24/7 English-language news channel 'RT' - http://rt.com/ - so will receive global recognition for their achievement. They were also raising money via sponsorship for Addaction http://www.addaction.org.uk/ , which offers a residential rehabilitation service to help people beat their problems with drugs and alcohol.

Willaston Primary School Headteacher Clare Grehan gave her sincere thanks to event organiser Mike Forster, all the volunteers and visitors for their continued support of the event.

Events in the arena and playground area included the a performance by the Willaston School Percussion band, the Willaston Scouts Ninja Poi Display Team, dancing by the X Academy of Performing Arts, and singing by TheFunkyChoir.com. The arena and adjacent areas were surrounded by charity stalls, an inflatable slide and food and drink outlets.

Fortunately, the rain stayed away and was enjoyed by several hundred people. 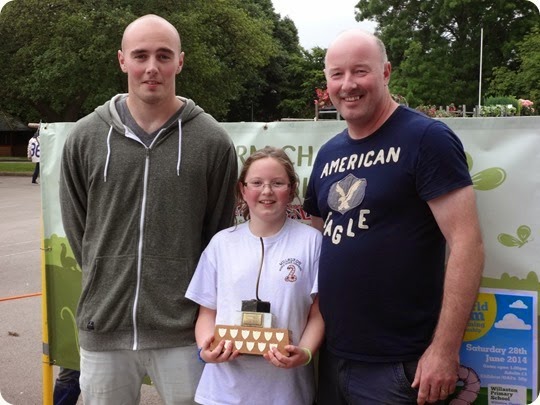