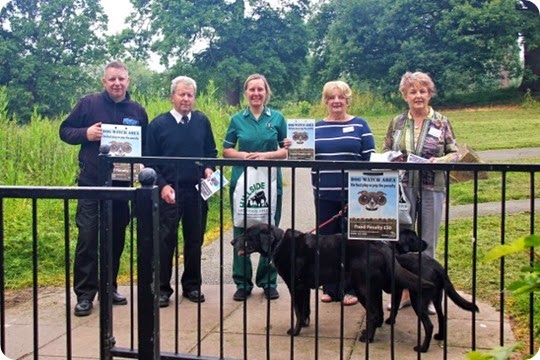 “Dog Watch is a very positive way of engaging the public and dog owners in addressing and taking responsibility for keeping our streets and open spaces free from dog fouling.   I have two dogs of my own and, whilst I am out walking them, other dog owners often grumble about the amount of dog mess in certain parts of our local area.   The idea of Dog Watch was mentioned to me by a fellow dog walker who was keen to see us implement an initiative to tackle the problem in a positive way.  We chose to start at the Joey the Swan area because we have recently had a number of complaints about its public pathways.  So far everyone who has taken the time to stop and speak to us about Dog Watch has been very pleased that we are doing something to try to reduce the problem of dog fouling.  They have also suggested other areas close by that would benefit from Dog Watch.  Clearly we are on the right track with this scheme.”

“Perhaps unbelieveably, complaints about dog fouling are amongst the most common reason for residents to contact their Councillor.  The Council often gets criticised for the small number of penalty notices it gives out for dog fouling but most residents would understand that our Wardens are unlikely to be ‘on the spot’ to witness every incidence.  That’s why we need to work proactively with our residents. Our Ward covers a very large area, we have the Connect 2 pathways in our Ward and also the linear pathways and open spaces by Wistaston Mill, we intend to roll out Dog Watch in those areas in the very near future.”

Everyone at Hillside is delighted to support Cllrs Simon and Weatherill in their Dog Watch scheme, responsible dog ownership is key to keeping our streets and open spaces clean.  Picking up after your dog helps us to have  clean and safe places for everyone to enjoy whether you are a dog owner or not.  We are happy to donate the ‘poo bag dispensers’ to the Councillors to give away to dog owners.  We would like to think that most dog owners already carry poo bags and we would also hope that all owners have their dogs microchipped so that their pet can be returned to them if it gets lost or strays.  Hillside is working with the Dog’s Trust at the moment and is offering free microchipping for your dog until the end of the year.”

“I think Dog Watch is a brilliant way to engage the public in a positive way.  Joey the Swan is the ideal area to start this scheme as it is widely used by children, families, walkers and dog walkers.   I’m looking forward to working with Cllrs Simon and Weatherill when they roll Dog Watch out to other areas in their Ward.”

“Whilst we were on the Joey the Swan pathway we came across a lost dog.  It came to Cllr Simon and her two dogs but we quickly realised that his owner was not with him.  Fortunately we were able to use the Microchip scanner on him and we were able to start the process trying to reunite him with his owner.  Bev’s message about getting your dog microchipped is a very important one.”

The important Cheshire East contact numbers contained in the Dog Watch literature are:

To report a dog fouling incident or

To report a straying dog or

If you would like to have your dog microchipped free, under the Dog’s Trust  microchipping scheme, phone