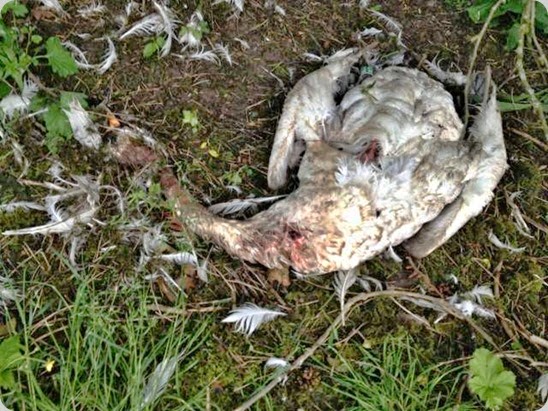 This is an upsetting image of the dead swan but it is evidence of what has happened. It is claimed on Facbook that it was found on the lake headless and a carcass on Tuesday am. But this photo was taken at 7:45 on Monday by 5 witness to its death. Its claimed its a fox. But the facts are its very rare for a fox to come out in the day when people are about and this happened in broad day light between 4-7 o'clock.    Foxes and swans have lived in the park for years and its never happened before. Why would a fox take on a swan when there is easy picking with other wildlife special lots of rabbits which would not put up a fight?

Foxes normally only kill for food and take the head straight away as its the most nourishing part. If it was a fox in daylight doing this are children safe? We know this was in the bushes the swans have never ever gone in the bushes. 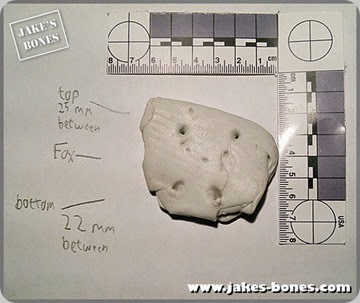 But look at the swan it has a single hole in  the neck a bite from a fox or a dog would look like the above with the two canine teeth 25mm apart and a dog similar but wider so if there isnt the two bite marks it suggest it wasnt done by a dog or fox everyone who has seen the picture agrees with this. So what has killed it? As the body has disappeared we may never know and cant find out but a single hole suggests a shot or a arrow or something like that we will never know. If anyone saw the swans on monday let us know we know it was ok up till 4 oclock so if you saw it after then alive we can narrow down the time if you saw anything else or heard anything let us know. We have sent the images to experts to see if they can provide any more evidence as to what did this