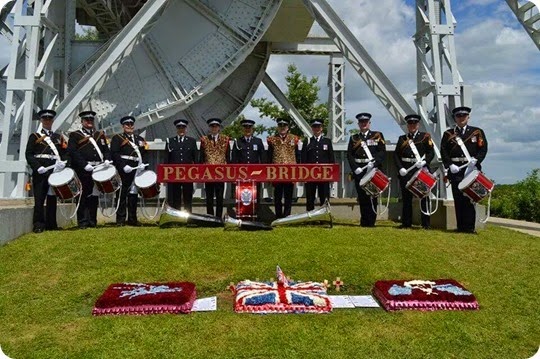 They played in front of tens of thousands of spectators, Veterans of the D-Day landings, The Duke and Duchess of Cambridge and the Prince of Wales during a five day tour of the British and Canadian sectors of the beaches and were based in Benouville.

On 5th June they led the march across Pegasus Bridge before playing to the Prince of Wales at the Pegasus Memorial Museum, then led the 9th Battalion of the Parachute Regiment after their commemorative jump.

On 6th June - "D-Day" 70th anniversary - in the morning they played at Gold Beach and gave a stick lifting rendition of the Royal Marines Regimental March when leading former Marines at Juno Beach. In the afternoon of the same day they led the parade into Arromanches and played in front of The Duke and Duchess of Cambridge (Prince William and Kate Middleton) at a concert broadcast on BBC One.

Wistaston resident, Robert Richardson, aged 42 who is a drummer with The Corps of Drums said, “It was the opportunity of a lifetime to perform in front of members of our Royal Family and to meet with some of the gentleman who landed on the beaches of Normandy. It was a privilege and an honour to perform during the commemorations.”

The Corps of Drums can be seen at the Kings Shilling Walk commemorations in Queens Park, Crewe on Sunday 3rd August and at a World War I commemoration concert at Nantwich Civic Hall on Sunday 5th October.