The Wistaston Village Fete took place on the afternoon of Saturday 21st June 2014. This annual event is organised by the Wistaston Community Council and took place within the grounds of St Mary's Church Rectory, Church Lane, Wistaston.

Once the procession had arrived within the Arena at the Rectory the retiring Rose Queen (Naomi Barker) thanked Wistonian's for their support and stated that over £2,700 had been raised for Alder Hey Children's Hospital during her year of office. St. Mary's Wistaston Rector Mike Turnbull then passed the crown from Naomi to this year's Rose Queen (Lucy). Lucy stated that her chosen charities this year are Cancer Research UK and the Wistaston Scout Group. This year’s Wistonian of the year, Eileen Bamber, then officially opened the Fete.

John White and Ken Sambrook were the Master of Ceremonies and introduced each event in the Arena. John White gave a tribute in memory of Sheila and Geoff Armitage who have both sadly passed away within the past year. They were strong pillars of Wistaston’s community for many years and will be greatly missed.

Eileen Bamber and a previous Wistonian of the year, Laurie Clough, presented prizes to the winners in the Laurie Twiss Award for Journalism. Eileen thanked Rector Mike Turnbull for allowing the Wistaston Community Council to use the Rectory for the Fete.

Several children took part in the fancy dress competition and entries included a cowboy, a cowgirl, a strongman, a Superman, a pirate, a nurse, a Ninja turtle, a footballer and several princesses. The winner was 5 year old Stirling Marsh from Wistaston for his Rocket Man costume, with his 2 year brother Samson receiving second prize for his Robin (Batman's sidekick) costume complete with racing bike. They received their prizes from judges Eileen Bamber and Laurie Clough. All of the children who entered received a bag of sweets. 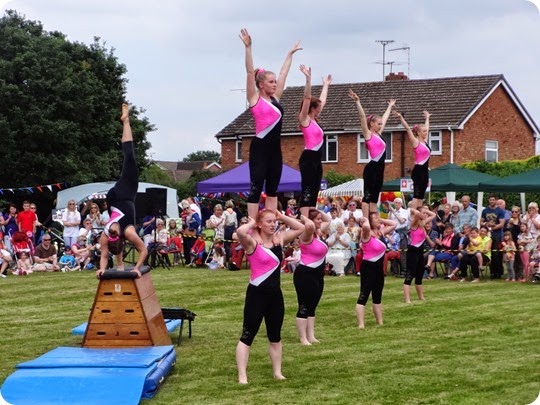 There were over 30 stalls representing local organisations and charities, plus a bouncy castle and refreshments stands. Stalls were each allocated a country participating in this year’s FIFA World Cup. The best dressed stall award went to Shavington Drama Group for their stall themed on Costa Rica. They received their prize from Mayor of Cheshire East Council, Councillor Wesley Fitzgerald and Mayoress, Mrs Joan Fitzgerald. Refreshments were also available across the road in St Mary's Church Hall.

Admission to the Fete was by donation and proceeds from the gate receipts and Wistaston Community Council stalls will go towards other Wistaston village events, such as the Flower and Produce Show, Spring and Christmas Concerts, and the November Fireworks Display. The Wistaston Community Council desperately requires new members to help organise next year’s Fete, as well as the other Wistaston-based events. Please visit http://www.wistastoncommunity.co.uk for further information if you would like to join. 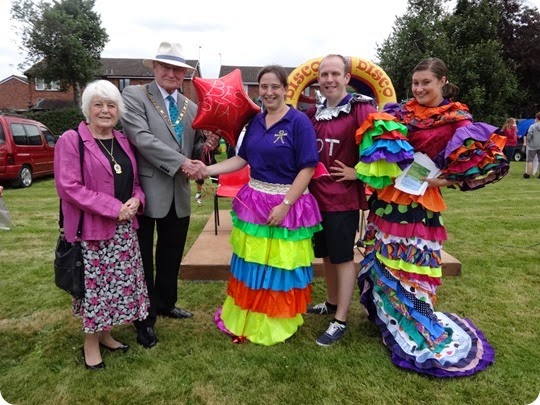