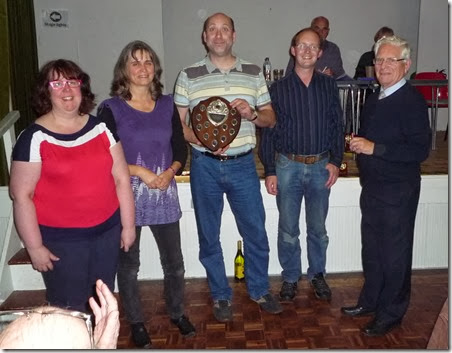 The raffle was organised by Glenys White and Bill Heath for prizes which were all kindly donated. The raffle made £90.

The winning team was called 'Four in a Corner' which comprised Christopher White, Andrea Ollerhead, Peter Jones and Juliet Gordon. They tied with 'The Hall Stars' with 39 out of 60 points. In the tiebreak the 'Four in a Corner' team were victorious by 2-1.

The Fred Lorimer trophy was presented to the winning team by John Cooke, President of the Hall's management committee.

The Dingbats quiz was won by a team called 'Joyce's Choice'.

Event organiser John White said, "We had another enjoyable and successful community event, which raised £160 for Hall funds. We thank everybody who supported this annual event for the Fred Lorimer trophy".