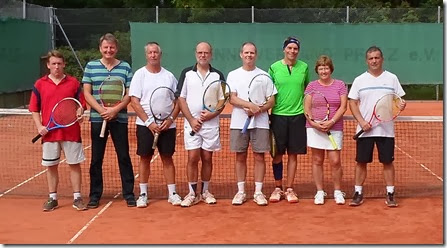 They played four clay court matches against Armin, Stephan, Karl and Torsten from Birkenheide Tennis Club with the overall result being a 2-2 draw.

WJTC presented Birkenheide with a small cup, featuring Wistaston's Joey the Swan logo, as a memento of their visit.

During their four day stay Ben, Chris, Diane and Jonathan also went to a local wine festival called 'Wurstmarkt' and went on a sightseeing tour of nearby Heidelberg.

Ben organised the visit to this particular country as he has German ancestry with an Auntie Marga and Uncle Andreas still living in Birkenheide.

Ben said, "I have to say it was the best and most enjoyable tennis trip I have ever done and would love to do it again sometime - it was German hospitality and friendship at its best."