Batting it out for 'special' success 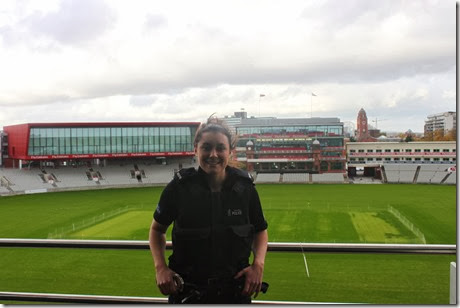 Women′s Lancashire Cricket team captain Jasmine Titmuss says the skills that she has learnt as a Special Constable have helped her on the pitch.

Jasmine said: "Being a captain is all about making the right decisions at the right time and communicating with people in pressurised situations, something not too dissimilar to working as a Special.

"The discipline and teamwork that is involved with being a Special Constable has certainly helped me out".

The 24 year old who was once capped by England A team, joined Cheshire′s Special Constabulary in 2011 because she "wanted to make a difference" and can regularly be seen ‘catching out′ criminals in the Wilmslow area.

"Being a Special really appeals to me. The satisfaction I get out of helping people in the community - who are often in a time of need - is similar to that of winning a cricket match" said Jasmine.

On first glance Jasmine′s two worlds couldn′t be further apart but she jokes that there are definitely some similarities between them.

Jasmine said: "It′s not as different as you think. For example, the banter that goes on during the course of a cricket match is like dealing with somebody who has had a few too many drinks on a Friday night!"

Jasmine says that her team-mates are constantly intrigued about what she does, so it might not be long before you see the whole of Lancashire Women Cricket team patrolling the streets.

"My team mates are really supportive of what I do. They often joke that they know they are in safe hands on the field, and some have even expressed interest in joining themselves" said Jasmine.

England Women′s Captain Charlotte Edwards MBE said: "We all have our hobbies that keep us busy off the pitch, but being a Special Constable is one of the more interesting ones. I think it is great that Jasmine is able to dedicate some time to helping her community and learn new skills in the process that are transferable between cricket and police duties".

Cheshire Constabulary is currently embarking on a county wide recruitment drive. For those interested in becoming a Special Constable, further information is available at cheshire.police.uk/jobs/special-constables.aspx or by emailing getinvolved@cheshire.pnn.police.uk.