For over six years Crewe Brass has had a strong friendship with HHS Bischofsheim, an accordion band from Crewe and Nantwich’s twin town. They first shared a stage in 2010 when Crewe Brass were invited to take part in Bischofsheim’s music festival and they have been firm friends ever since with the brass band making another trip to Germany in 2014 and welcoming their friends to Crewe in 2012.

This year it’s the turn of HHS Bischofsheim to make a trip to Cheshire and they will be joining Crewe Brass for a spectacular joint concert on Saturday 1st October at St Mary’s Church in Nantwich.

Musical Director, Jamie Meredith is looking forward to performing alongside the accordion band again ‘it really is a unique and exciting sound when you bring together a full 25 piece brass band and an accordion orchestra. The friendship that the two bands have developed over the past years really reflects in their musical performance and this joint concert will be the highlight of Crewe Brass’ 2016 concert schedule’.

Tickets are just £5 and are available now from St Mary’s Church shop in Nantwich, or contact crewebrass@yahoo.co.uk to reserve your tickets. 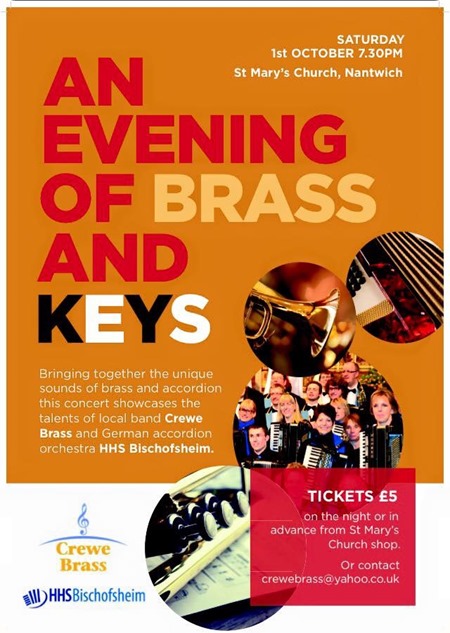 HHS Bischofsheim is an accordion orchestra from the town of Bischofsheim – you can see more information on their website: http://www.hhs-bischofsheim.de/

Crewe Brass are a local Brass Band based in Crewe and are entirely self-funded with all musicians playing entirely voluntarily. The band is also a registered charity. You can see more on their website www.crewebrass.co.uk