The Wistaston Singers at Port Sunlight.

The Wistaston Singers took their talents on the road when they travelled to Port Sunlight on the Wirral. They performed a fundraising concert on Saturday 7th November 2015 at Christ Church United Reformed Church http://www.ccpsurc.info/ .

In the afternoon the choir and guests were able to view the delightful village of Port Sunlight, along with its art gallery, museum, cafe and garden centre.

Phil Houghton was the Musical Director at this evening concert and also introduced each song and soloist. Jane Hale was the accompanist on the piano. The Wistaston Singers sang Get me to the Church on time (Lerner & Lowe), a My Fair Lady compilation (Lerner & Lowe), Nightingale sang in Berkeley Square (Sherwin), Can you feel the love tonight (Elton John), Deep Harmony (H Parker), You’ll Never Walk Alone (Rodgers), a tribute to Queen compilation (Brymer), Love Changes Everything (Lloyd Webber), Jerusalem (Parry) and a rousing Cwm Rhondda to finish the concert.

Chris White (ukulele), accompanied by Phil Houghton (organ), performed three songs: Pack up your troubles (Powell), Lancashire Toreador (Formby) and Keep the Home Fires Burning (Novello). Jane Hale performed Flying Free (M Begg) on the flute, accompanied by Ann Farrington. The audience were given the lyrics to some of the songs and were encouraged to join in for each chorus.

Proceeds from the concert will go to the Christ Church United Reformed Church.

Musical Director Phil Houghton said, "The choir had a wonderful visit to Port Sunlight and were most appreciative to the audience for coming to watch us perform at this fund-raising concert."

The Wistaston Singers were originally formed by members of the choir at St Mary's Parish Church, Wistaston in May 2000 and now number over forty members singing four-part harmony music. The choir perform a variety and eclectic choice of music ranging from choral church music and anthems, Gilbert and Sullivan items, music from the shows, music from modern composers such as John Rutter encompassing from the 15th century to the 20th century. They perform up to five concerts a year at various venues in south Cheshire. The choir is also available to perform at weddings in the area. The choir rehearse weekly in the parish rooms of St Mary's Church, Nantwich on a Wednesday evening from 7:30pm to 9:30pm. New members are welcome and further details may be obtained from Choir Secretary Jill Oakes, Tel: 01270 662940 and email: jillandjohnoakes@uwclub.net

Their next concert will be a Christmas concert on Saturday 12th December 2015 (3pm) at St Stephens Methodist Church, Gainsborough Rd, Crewe. 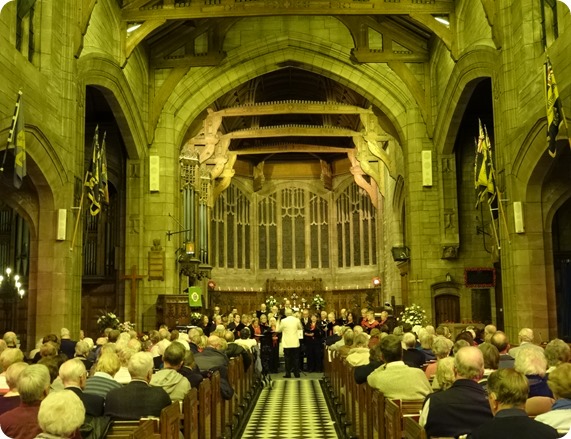