Service of Remembrance in Wistaston.

The Wistaston Memorial Hall and Community Centre was filled to capacity on Sunday 8th November 2015, as the village remembered those who made the ultimate sacrifice in two world wars.

The impressive poppy arrangement on the stage was displayed by Mrs Elizabeth Russell (Wistaston Flower Club).

The names of the sixteen men from Wistaston who perished during World War 2, were respectfully read by Mrs Barbara Brereton.

The Wells Green Church choir, led by their musical director Mrs Myra Wood, added quality to the music and hymns.

A wreath was placed at the front of the building by the hall’s President, John Cooke, accompanied by Cub George Edge-Robinson who placed a cross in memory of Lieutenant Commander Roy Berryman Edwards DSO, sent by his daughter Mrs Sylvia Hammond, from Kent.

The collection at the service was £287 for the Royal British Legion, which was represented by Alan Brereton. 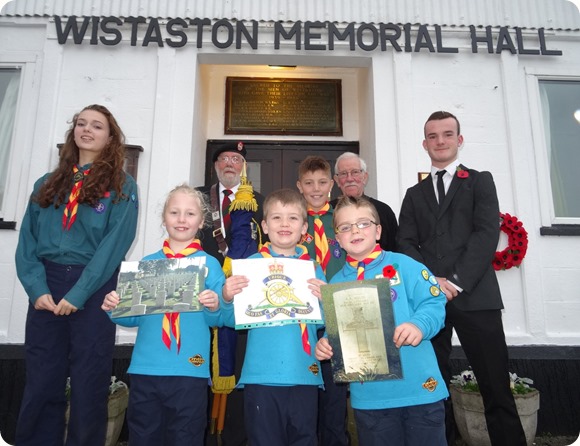