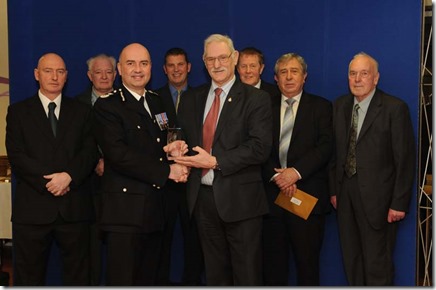 On Monday 28th January 2013 Cheshire Constabulary held a joint awards ceremony to recognise the work of Special Constabulary Officers and Police Support Volunteers. The event was hosted by Assistant Chief Constable Janette McCormick and is the first time such a ceremony has been held in the Cheshire.

As well as honouring the work of volunteers across Cheshire, the event was also used to announce the new Special Constabulary Chief Officer for Cheshire, who is Brian Woodward.

The event was opened by Cheshire′s Police and Crime Commissioner, John Dwyer, who said: "I was delighted to open the Awards Ceremony. I always find stories about volunteers very powerful when I realise what can be achieved by people who are prepared to give up a little time and energy and give something back to society.

"We heard some amazing stories about people who have gone that little bit further to work as part of the wider policing family in helping to make Cheshire safer."

There were two categories for Police Support Volunteers. Winner of the individual category was Denise Rogers, who works with the Drive Survive programme. The award for best team went to the Museum of Policing in Warrington.

There were five main awards for the Special Constabulary:

All the awards were presented by Chief Constable David Whatton, and on closing the evening he said: "the Constabulary has a long history of being supported by volunteers who bring the public into policing which in turn builds confidence, transparency and trust in the organisation."

Organiser Community Engagement Manager Jenny Ford said: "We are hoping that the awards will now become an annual event. We have received a lot of positive feedback and people obviously enjoyed the evening."

The Police and Crime Commissioner has volunteering at the centre of his plans for Cheshire Constabulary, and at the weekend he met with the latest intake of 13 Special Constabulary officers.

The Commissioner said: "These men and women have volunteered to give some of their time to help make Cheshire an even better place to live. After training they will have the same powers as regular officers and will work alongside them to keep our streets and our homes safe. It is a challenging but rewarding task and I believe the volunteers benefit from learning new skills and broadening their experience.

"I want to see the number of Specials Constables increase and be a valuable part of policing our neighbourhoods. They will have local knowledge and, because of that, people will use them as a point of contact when they have issues which are causing them concern. They will be invaluable in tackling the type of crime and anti-social behaviour which affects people′s everyday lives."