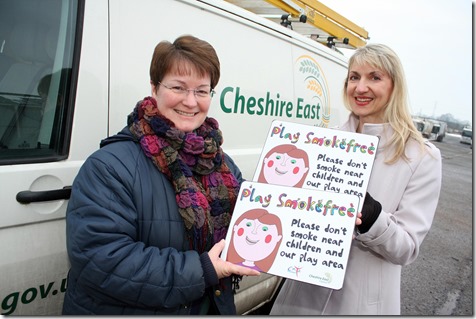 Dozens of signs are being installed throughout Cheshire East to help discourage people from smoking in children’s play areas.

A total of 170 play areas will be covered by the Play Smokefree code, which has been developed by heart health charity Heart of Mersey in partnership with Cheshire East Council, Central and Eastern Cheshire Primary Care Trust (PCT) and the Cheshire and Merseyside Tobacco Alliance.

A survey of Cheshire East residents, 22.2 per cent of whom were smokers, highlighted that nearly all (97.5 per cent) are in favour of a voluntary code of not smoking in playgrounds.

Park wardens will discourage people who persist in smoking in play areas and by signage designed by children requesting that children be allowed to ‘Play Smokefree’.

Councillor Janet Clowes, Cabinet member in charge of health and adult social care, said: “We’re committed to the role our parks play in helping residents live active, healthy lifestyles and this voluntary scheme empowers our local communities themselves to change their smoking behaviour.

“Children learn their behaviour from adults. If children see smoking as a normal part of everyday life they are more likely to become smokers themselves. I think that, knowing this, most adults would agree that not lighting up in a children’s play area is not too much of a sacrifice and I hope residents will support this initiative.

“Discouraging smoking around children in our play areas will help to reduce the number of young people in Cheshire East that smoke.”

The Council’s health improvement team has been heavily involved in the scheme and its role is to ensure that services are provided to help improve and protect the health of people in Cheshire East.

The team works in partnership with a wide range of organisations in order to achieve their shared goals of making Cheshire East a healthier and safer place to live.

Research shows that reducing child exposure to smoking decreases the uptake of smoking among young people in the long term.

Jo McCullagh, tobacco control programme lead at Heart of Mersey, said: “Three out of four children are aware of cigarettes before they reach the age of five.

“People smoking in children’s play areas is a fairly common sight, but it suggests to children that smoking is a harmless, acceptable, everyday activity. The reality is that this is a habit that is addictive and kills.

“A child who smokes just one cigarette doubles their chances of becoming a regular smoker by the age of 17.

“We want to use this voluntary code to de-normalise smoking in public play areas and protect children in the very environment in which they should be safe.”