Wistaston Singers and The Kipling Singers

Wistaston Singers and The Kipling Singers took part in an evening concert at Union Street Baptist Church in Crewe on Saturday 20th October 2018.

Wistaston Singers performed music including West Side Story, Anything Goes, Unchained Melody, Sanctus, The Lord is My Shepherd, You Raise Me Up, and Flying Free. Phil Houghton was Musical Director and organist. Ann Farrington was the accompanist.

The choirs combined for Oliver and Deep Harmony.

Light refreshments were served during the interval. Over fifty people watched the concert. Proceeds will be split between Union Street Baptist Church, Wistaston Singers and The Kipling Singers.

Wistaston Singers were originally formed by members of the choir at St Mary's Parish Church, Wistaston in May 2000 and now number over forty members singing four-part harmony music. The choir perform a variety and eclectic choice of music ranging from choral church music and anthems, Gilbert and Sullivan items, music from the shows, music from modern composers such as John Rutter encompassing from the 15th century to the 21st century. They perform up to five concerts a year at various venues in south Cheshire, plus one concert out of area. The choir rehearse weekly in the parish rooms of St Mary's Church, Nantwich on a Wednesday evening from 7:30pm to 9:30pm. Wistaston Singers next public concert is their annual Christmas Carol concert on Saturday 15th December 2018 (3pm) at St Stephen’s Methodist Church on Gainsborough Road in Crewe.

The Kipling Singers formed around twenty-five years ago and currently features three sopranos, one tenor, two bass and two altos. They perform a variety of show and light music. Their name comes from Kipling Way in Crewe where they practice each week. The Kipling Singers next concert is on Saturday 10th November 2018 (7pm) at Union Street Baptist Church in Crewe in aid of Macmillan Cancer Support. 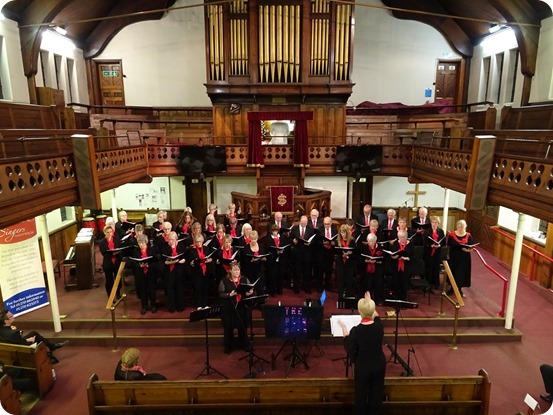