The quiz setters were Peter & Christina Wainwright who had organised their sixth quiz at the Hall on Church Lane in Wistaston.

The raffle was organised by Glenys White, Jonathan White and Meurig Jones for prizes which were all kindly donated. The raffle made £90.50.

There was also an information stall, staffed by George Edge-Robinson, for advice about the numerous group’s and societies that use Wistaston Memorial Hall throughout the year.

The Fred Lorimer trophy was presented to the winning team - ‘The Hall Stars’ - by Peter & Christina Wainwright, quizmasters.

Event organiser John White said, "We had another enjoyable and successful community event, which raised over £250 for Hall funds. We thank everybody who supported and contributed towards this annual event for the Fred Lorimer trophy".

Two forthcoming events at the Hall are:

-Thursday 8th November (7:30pm) - An ‘Autumn Concert’ by the Crewe Concert Band with Musical Director Adam Stilton. The concert will include ‘Last Night of the Proms’ (flags provided). Tickets = £6 (includes light refreshments) on sale on the door.

-Sunday 11th November (3pm) - 'Service of Remembrance' - remembering the sixteen men from Wistaston who perished in the First World War. 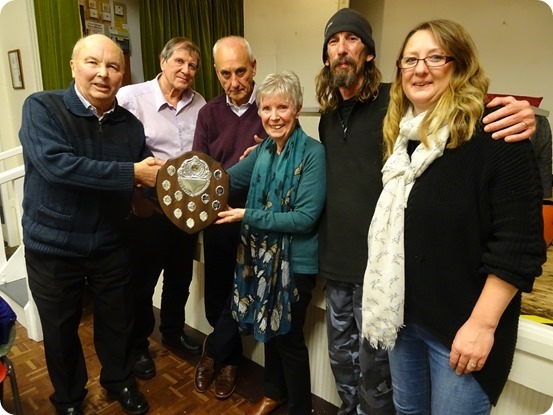