SEAHORSE SWIM THEIR WAY TO THE NATIONAL FINALS

Members of Seahorse Swimming Club were triumphant in the recent Halliwick North West regional gala at Crewe's Lifestyle Centre. The won 15 medals in total - ten gold, four silver and one bronze. This success gives the gold medal winners an opportunity to compete at the national finals in Sevenoaks, Kent, later this month.

Seahorse competed against swimmers from Ellesmere Port and Sale and the awards were presented by the Mayor of Crewe Town Council, Councillor Brian Roberts, who was thrilled to see the swimmers competing with so much enthusiasm.

“The Halliwick Association of Swimming Therapy gives people with disabilities opportunities to take part in competition. In recent years, Seahorse swimmers have put Crewe on the map, at both regional and national level with their success. Once again, the swimmers showed lots of determination in the pool and it was pleasing to see so many swimmers qualify for the nationals. They were also thrilled to receive their medals from the Mayor who complimented all the swimmers for their efforts.” - Gareth Roberts, Secretary. 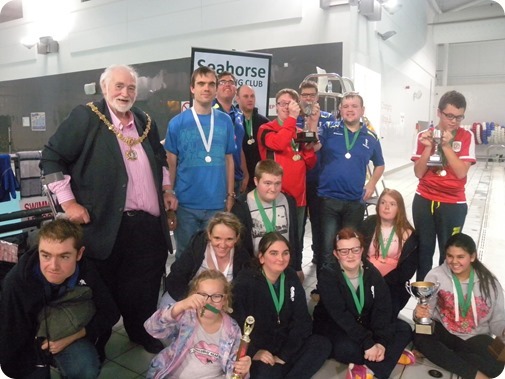