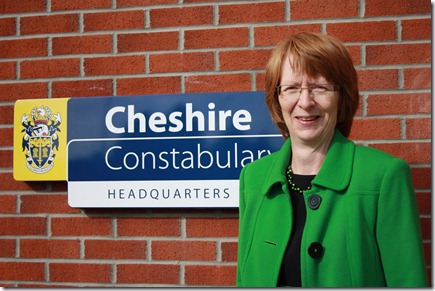 Karen Watkins, Director of Corporate Services with Cheshire Constabulary, has been made a Member of the Order of the British Empire in the Queen′s Birthday Honours, for services to policing.

Karen describes her work as, "Not a job but a passion".

She says, "I really love working with some great people and knowing we provide services which keep the wheels turning for policing in Cheshire. I am proud of what Cheshire Constabulary do. Policing is about making life better for everybody."

Policing was going through big changes when Karen Watkins joined Cheshire Police in 1986. As the force research officer, she replaced a uniformed Police Superintendent as part of a "civilianisation" programme.

Now, as Director of Corporate Services, she is once again at the centre of change, leading the move to redesign back-office services, including a ground-breaking shared services agreement with Northamptonshire Police.

Phase one of that shared service programme, covering finance and procurement, came into operation successfully in April this year. Phase two, involving human resources and duty management, will go live in October.

"Arranging for two forces to work in partnership across a lot of their services is a huge challenge," she says, "But we are making it work. It will mean real strides in efficiency."

Before joining the constabulary Karen had spent two years on a university research project and two years as a statistician for a frozen food company.

"I thought it would be a job for another couple of years, but things turned out very differently, she says, "One of the great pleasures of spending so long with the Constabulary is that I see people arrive at the beginning of their careers and watch them progress through the ranks. It is good to see."

How does she view her award?

"I′m thrilled. It is a real honour and it really acknowledges what everybody here does and what they are achieving."