Nantwich Agricultural Society Ltd. has been recognised with the Queen’s Award for Voluntary Service for 2016 (the MBE for volunteers) 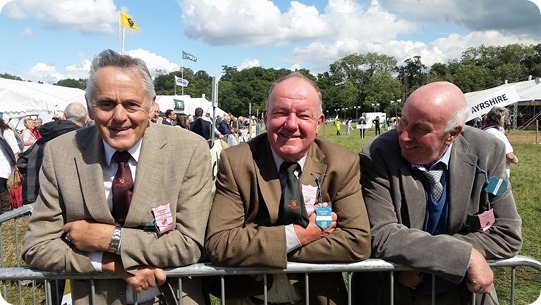 A voluntary group from Nantwich, organisers of The Nantwich Show and the International Cheese Awards has been honoured with the Queen’s Award for Voluntary Service, the highest award a voluntary group can receive in the UK.

Nantwich Agricultural Society, a registered charity celebrating its 120th anniversary has been recognised due to the large numbers of volunteers that help to put on one of the largest one-day agricultural shows in the country and the largest Cheese show in the world.

Michael-John Parkin the Chairman and his partner Liz Southall from the Society attended a garden party at Buckingham Palace on 19 May where they met the Queen and other members of the Royal Family along with fellow award winners.

Nantwich Agricultural Society is one of 193 charities, social enterprises and voluntary groups to receive the prestigious award this year. The number of awards given to groups this year is slightly higher than last year, showing that the voluntary sector is thriving and full of innovative ideas to tackle community challenges.

The Queen’s Award for Voluntary Service is the highest award given to local volunteer groups across the UK to recognise outstanding work in their communities. The awards were created in 2002 to celebrate the Queen’s Golden Jubilee and winners are announced each year on 2 June – the anniversary of the Queen’s Coronation.

Award winners this year range from a War Memorial Community Trust, providing social facilities for the benefit of the community in Clwyd, Wales, to a club enhancing the community by developing individuals through athletics, in Ayrshire and Arran, Scotland.

The volunteers of Nantwich Agricultural Society will receive the award from the Lord Lieutenant of Cheshire on Thursday 21 July at Nantwich Show Ground and all volunteers are welcome to join the celebration and photo-call, just ahead of this year’s show on Wednesday 27 July.

“I warmly congratulate all of the inspirational voluntary groups who have been rewarded for their community work with a Queen’s Award for Voluntary Service. The judging panel for this year’s awards were struck by the quality and breadth of all the successful groups.

The thousands of volunteers who give up spare time to help others in their community and to help solve problems demonstrate the very best of democracy in action.”

“I would like to congratulate all groups who received this year’s Queen’s Award for Voluntary Service, in recognition of their fantastic achievements. The huge amount of work and commitment these organisations put into their local communities is surpassed only by the passion and motivation of the individuals who volunteer. I hope these groups continue to inspire others to get involved and make a positive impact so that we can continue to build a more compassionate society.”

"I am delighted that the Volunteers of the Nantwich Agricultural Society have won The Queen's Award for Voluntary Service 2016. The Nantwich Show is one of the leading one-day Agricultural Shows in the country and the associated International Cheese Show has a world-wide reputation. The Show has a long history and is a significant event in Cheshire's rural calendar each year. Its success is founded on the magnificent contribution of the army of volunteers of all ages drawn from all walks of life, and I very much look forward to presenting them with their Award on behalf of Her Majesty The Queen."

I am honoured, and immensely proud to receive the Queen’s Award for Voluntary Service, on behalf of the Society, in this, our 120th year. We rely on the commitment of several hundred volunteers each year to facilitate one of the best one-day agricultural shows in the country. The Award is a wonderful recognition of the dedication of all our volunteers, many of whom have served the Show for over 20 years, and is a great encouragement to keep our fantastic show going for future generations.