David Rowsell is Principal at the British International School of Washington DC in the USA and flew over with his wife to visit family and deliver the insightful talk.

David has previously been Principal at the English International School in Prague and had visited and taken photographs at several of the locations that featured in his presentation.

David informed the audience that Operation Anthropoid was the code name for the assassination of the German SS General Reinhard Heydrich, who was one of the main architects of the Holocaust.

The Free Czechoslovak Army were based at Cholmondeley Castle in the summer of 1940, and it was from these men that two were chosen to be sent back to Czechoslovakia to carry out this daring mission. The two men chosen were Warrant officers, Jan Kubiš and Jozef Gabčík.

Kubiš and Gabčík were parachuted into Czechoslovakia on 28th December 1941. They carried out Operation Anthropoid on 27th May 1942 by ambushing Heydrich’s car on the streets of Prague. Although Gabčík’s Bren gun jammed, the explosion from a grenade hurled by Kubiš fatally injured Heydrich and he died one week later. Kubiš and Gabčík escaped the scene of the attack. However, they both tragically died weeks later when their hideout location in a Prague church was betrayed by collaborator Karel Čurda, who had also been based at Cholmondeley.

Several thousand people were killed in Nazi retaliation to the assassination.

Coincidentally, there are two movies due out this year relating to Operation Anthropoid: ‘Anthropoid’ starring Cillian Murphy and Toby Jones and ‘HHhH’ starring Rosamund Pike and Jack O'Connell.

Graham Dodd, Vice Chairman of Nantwich Historical Society, said, “We are always keen to attract new members to the society. We are currently putting together the programme for the 2016-17 series of talks, which will commence in October.” 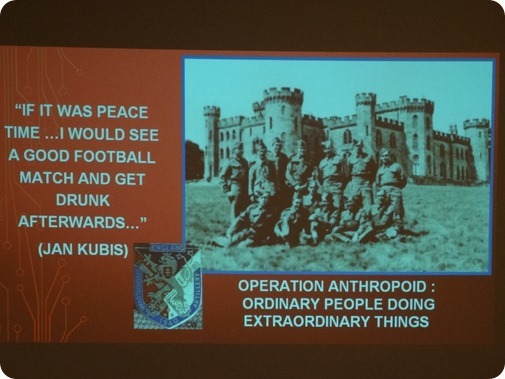