In previous years the Shavington Academy year 10 pupil has organised a tennis tournament and a 12 hour ‘Tennisathon', raising hundreds of pounds in the process.

Each participant paid a donation to play against each other. Eight players played fifty-eight games in total. The winning pair were Ben Reinhardt and Paul Sheeky, who won by a one game margin and received a shield donated by Concorde Trophies.

George also organised the raffle prizes which were a hamper donated by Wistaston Jubilee Tennis Club members, a £10 voucher donated by Cheerbrook Farm, £10 voucher from Minshull's, 3 family tickets from Cotebrook Shire Horse Centre, a one hour reiki session from Cheshire Reiki & Wellbeing Therapy, a round of golf for 2 people from Queens Park Golf Club, a meet the meerkats experience from Zoo2U, and a Reaseheath Family Festival ticket from Reaseheath College.

George’s mother - Julie - made sandwiches and a Victoria sponge cake for all participants.

In total £131.25 was collected for Sport Relief, which raises money to help vulnerable people in both the UK and the world's poorest countries.

George said, "I would like to thank everyone who played in the tournament and those who supported it. I would also like to thank all the generous contributors to the raffle. It was all for a very worthy cause”. 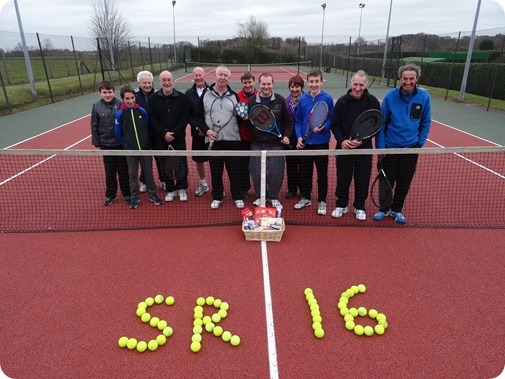