A charity football match took place in early August this year at the Cumberland Sports Ground in Crewe. The event featured an 11-a-side match between 'Aidan FC' and 'Leukaemia FC' and raised £470 for 'Bloodwise' (formerly known as Leukaemia & Lymphoma Research). There are still collection boxes at Kezbeccs General Stores (Coronation Crescent, Crewe) and J & H Carpets (Ridgway Street, Crewe) if you would like to add to the total already raised – any donations would be gratefully received.

The event was organised by Crewe teenager Aidan Reid, who is a Year 11 pupil at Sir William Stanier Community School in Crewe. Aidan said, "I raised money for Bloodwise as last year I lost my Uncle to leukaemia. I wanted their vital research to continue so that lives can be saved."

The kind-hearted teenager has also raised hundreds of pounds for other charities including a 9 mile walk for Macmillan (raising £952), a coffee morning for the neonatal intensive care unit at Mid Cheshire Hospitals (£401) and a charity football match last year for Cancer Research UK (£458).

Liz Boffey from Bloodwise (South Cheshire branch, http://www.bloodwise.org.uk) said, "Aidan is an inspirational young person who has raised a tremendous amount of money for charity and he is always full of fund-raising ideas. Bloodwise is so thankful to him for his hard work and enthusiasm with this venture. Every penny that has been raised will go into researching all 137 different types of blood cancer. We are determined to beat blood cancer." 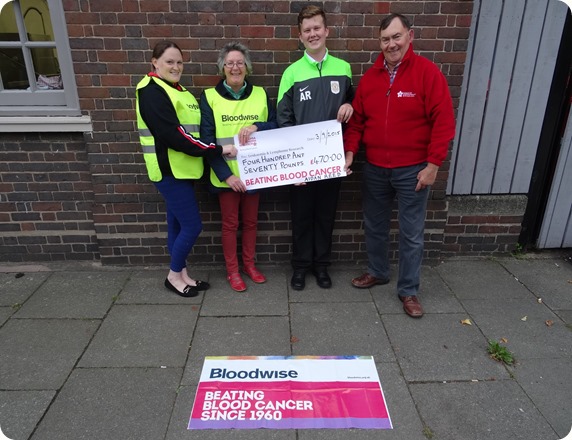