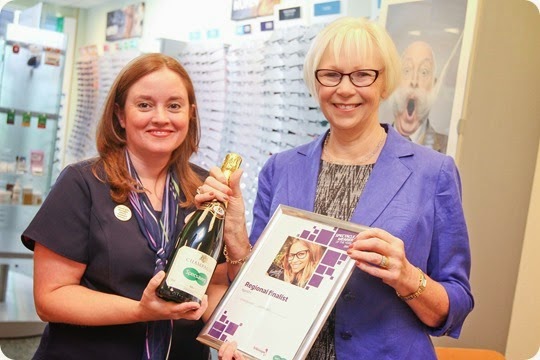 ONE of South Cheshire’s proudest glasses wearers was honoured today as they took a step closer to winning the coveted Spectacle Wearer of the Year Award, with a grand prize of £10,000 and a luxury holiday in the Bahamas.

Margaret Johnson, aged 69, from the village of Hough near Nantwich was chosen from hundreds of entries from across the North West region. Known as the Oscars of the glasses world, the awards celebrate specs wearers from the UK and Republic of Ireland, across four age categories: 15-24; 25-39; 40-59 and 60+.

Speaking about her place as a finalist in the 60+ category, Margaret, chairman of the Hough and District WI group, said: ‘I’m utterly delighted and shocked to have been picked as a finalist in my category for the North West.

‘I started wearing glasses more than 30 years ago and wear them as much for fashion as for my eye needs.

‘I’m very proud of my glasses and strongly believe everyone should look after their eyes with regular checks, especially as you get older.’

The awards were launched by Girls Aloud singer and West End star Kimberley Walsh earlier this year, who Margaret could meet at the awards ceremony if she triumphs in her age category.

Mel Sharpes, store manager at Nantwich Specsavers, said: ‘I’m delighted we have a Spectacle Wearer of the Year finalist from the Nantwich area this year. Margaret looks great in her frames and we wish her all the best in the competition.’

The awards will be held at London’s 8 Northumberland Avenue on Tuesday 7 October. All age category winners will win a VIP makeover, with one overall winner taking home the ultimate accolade in specs wearing.