Designation could save historic pub from demolition 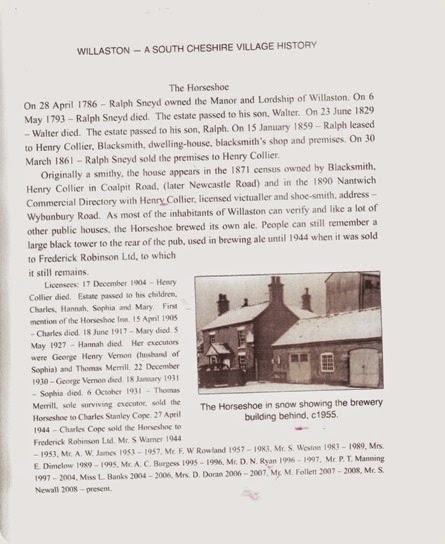 Willaston and Rope Ward UKIP Councillor Brian Silvester is hopeful that his campaign to save the historic Horse Shoe Inn in Willaston from demolition could be successful.

He said, “ I asked the Council to designate it so it could be saved.They have now informed me that they have decided to classify it as an undesignated Heritage Asset within the current proposals and recommending that that the developer amend his proposals in order to retain the building within the proposed scheme.(See below) This is an approach which has been achieved recently elsewhere in Cheshire East at Kents Green in Haslington and in Tytherington. I am grateful for the work done by the Conservation Officer on this. I appeal to the developer to recognise this new classification so that the building is retained and converted for residential use.Nobody wants to prevent the owner from developing this brown field site but it would be very sad if this bit of Willaston’s history was lost.”

Call for action on speeding in Rope Lane, Rope

Willaston and Rope Ward UKIP Councillor Brian Silvester is calling for action to prevent speeding in Rope Lane,Rope. He said,’This road is one of the main routes from Shavington to Crewe and for the Shavington High School.It is very narrow in parts and in places there is no footpath. The Borough Council want to erect a Pelican Crossing in Rope Lane, near to the junction with Bankfield Avenue, to assist school children and residents to cross this busy and dangerous road. A resident  has asked me to pursue speed reduction measures  and I am pursuing this with the Highways Department and the Police. I am calling for more signs to be erected to show the speed limit and for the Police to carry out speed checks at the busy time in the morning and afternoon/evening.’