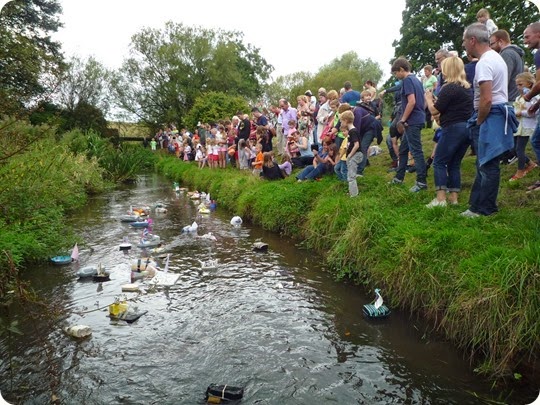 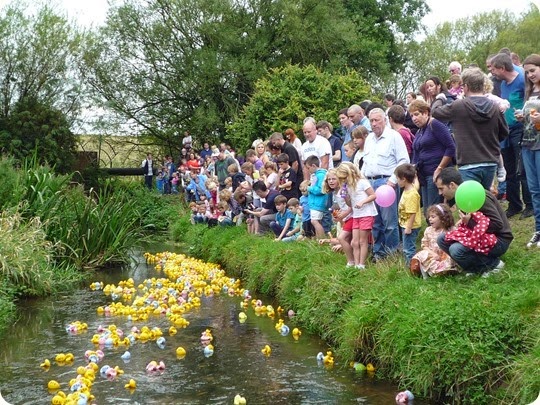 The 19th ‘Annual Community Duck Race and Children's Model Boat Race’ took place on Saturday 6th September 2014, at the Joey the Swan Recreation ground in Wistaston, with the permission of the Wistaston Parish Council.

The event, which was sponsored by Wistaston Community Council and the Crewe Cine & Video Club, was officially opened by the Wistaston Rose Queen (Lucy Rowland) and her Attendant (Charlotte Shaw). Members of the Hall's Management Committee organised the event. 49 model boats were entered into the Children's Model Boat Race, 874 duck race tickets were sold and their ducks entered into the Duck Race; the largest number in recent history.

All proceeds go to the modernisation of the disabled toilet project at the Wistaston Memorial Hall & Community Centre, Church Lane, Wistaston. There were also twelve stalls featuring local charities and organisations. Several hundred people attended this community event, which took place in glorious sunshine. The Wistaston Memorial Hall’s committee sincerely thank all those who helped to make the event a success in many ways, which raised £730 in total.

People came from all over England to see this quacking event – from Wakefield and Milton Keynes and as far away as SWANsea and DUXford. The Hall’s President, John Cooke, escorted the Rose Queen around the stalls.

b) Children's Model Boat Race organised by India Sloan and George Raiswell and started by Wistaston Rose Queen, Lucy Rowland. Boats of many shapes and sizes, made by the children, meandered around various obstacles, with teal and pochard in evidence:

1st – No. 803 – Marcel - wins £100, plus trophy donated by Les Fothergill. The winner came from the USA and was delighted with her awards.

The traffic controller was Meurig Jones. The race marshals were Mark Ray, Jonathan White and Rob Dutton. The stalls were organised by Glenys White.

Event organiser John White said, "This was another successful mallardesque community enterprise for Wistaston. The Memorial Hall's officers worked so hard to run the event. People who visited were most generous to buy so many tickets. I was pleased to hear that the stall holders and charities did well. The children were excited and eager to see their boats in action. It was a quacking great top of the bill success. We were fortunate with the weather. So many people helped to set up and take down the equipment; we thank them all. The Parish Council and conservationist Dave O’Hara had prepared the course. We can't wait for the 20th Duck Race on Saturday 5th September 2015, which will celebrate twenty years of ducking and diving – we must be quackers!"