Rural campaign is in support of European speed awareness week! 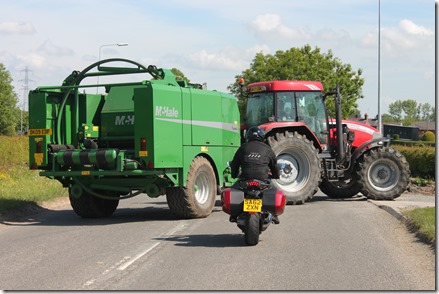 As the European wide speed enforcement campaign comes into force during 19-25 August, Cheshire Police are warning agricultural drivers about their blind spot whilst also advising road users about overtaking on country lanes.

In the past year, there have been a total of 23 people who were injured in road collisions involved in agricultural vehicles in Cheshire.

Am I in Your Blind Spot − a rural campaign launched by Cheshire Police - looks at common road manoeuvres which can result in rural road accidents; one of which are rear end collisions when the road user can sometimes misjudge the speed and directional changes of a tractor as it approaches from behind.

Detailed studies by the Department for Transport Think! Campaign on speed awareness states that:

The Department of Transport states that exceeding the speed limit or driving at an inappropriate speed is a major contributory factor in around one third of all road traffic collisions.

Sergeant Rick Weaver of Road Policing said that "one of our priorities will be in the detection of excess speeding in rural areas; but we are also using the blind spot campaign to warn other road users about overtaking on country roads.  Of the fatal road collisions that have occurred this year − involving motorcyclists − speed and poor planning are contributory factors as they try to overtake when it is not always safe to do so."

Cheshire Police have posted footage of their blind spot campaign on YouTube for the public to view.