GREAT SUPPORT IN NANTWICH FOR THE RETENTION OF GREEN GAPS 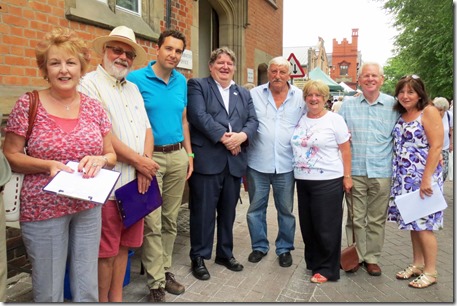 photograph shows Edward Timpson MP and Leader of CE Council Michael Jones with Wistaston representatives, in Nantwich, collecting signatures for the ‘Save the Green Gaps’ petition.

Members of Hands off Wistaston (HOW), held a street stall in the centre of Nantwich, drawing attention to the fight to save our existing Crewe and Nantwich Green Gaps.  These gaps are very important to local people as they currently separate Crewe and Nantwich towns from our local villages and our local villages from each other.  They help them to keep their own identity.  The Green Gaps were protected under the Crewe and Nantwich Local Plan and it is important that they are retained, in their entirety, in the emerging Cheshire East Local Plan.  These Green Gaps are coming under pressure from developers throughout our locality.

“We really struck a chord with shoppers and visitors to Nantwich, they were queuing up to sign our petition to ‘Save the Green Gaps’, it was brilliant”.

“Our MP Edward Timpson and Council Leader Michael Jones, together with Wistaston Ward Councillors Margaret Simon and Jacquie Weatherill, joined us collecting petition signatures and speaking to people about the importance of protecting the Green Gaps.  It was great having the support of our local representatives and also seeing just how many members of the public agree with us that the Green Gaps must stay and not be impinged on by developers.”

“The retention of the Green Gaps has always been of great importance to residents of Crewe and Nantwich.  Due the great interest from developers to build on them local people are really needed now to register their strength of feeling about them in any way that they can.  Just by signing petitions to hand in to Cheshire East and taking part in consultations on planning applications for large numbers of houses on land in Green Gaps they would be doing their bit.”

The ‘Save the Green Gaps’ petition run by Hands off Wistaston has 2000 signatures on it.  It will be formally handed over to the Council Leader, Michael Jones who will use it to further his argument that these current planning applications on Green Gap land are unplanned, unwanted and unsustainable.