Officers get on their bikes for COPS 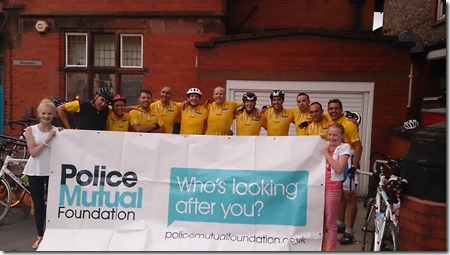 A charity bike ride around all 18 police stations in Cheshire was completed by a team of officers from the north of Cheshire on Wednesday, August 28.

The officers were cycling to raise money for COPS, a charity that helps families of police officers who have lost their lives in the line of duty to rebuild their lives.

Sergeant Graham Robinson said: "The overwhelming sense of achievement felt great and having done it all in support of a great charity, made the satisfaction even greater.

"We were joined for the first stretch by Assistant Chief Constable McCormick, who didn′t let the side down and led off at a great pace from the Constabulary Headquarters to Winsford Police Station."

Members of the public were provided with progress updates via the Force′s social media sites.

Graham said: "We have already raised well over £1500, smashing my initial target of £1000 and there are still monies to be counted."

The team got off to a great start and, as they arrived at each police station, were given encouragement and donations for their collection tin.

But the gruelling 130 mile bike ride included a ‘bicycle on bicycle′ crash, a ten mile detour, a tyre blow out, lots of sweat and a few brief pauses to collect donations.

A tyre blow out for Iron Man, Detective Constable Dave Morgan, meant a pit stop − but they were soon on their way. An extra kilometre was added to the route after the pack leader missed a turn.

Graham said: "Another navigation disaster saw us deviate about 10 miles off course."

Then as all was back on track, there was a sudden call from the front for everyone to slow down to avoid a crash − one cyclist had gone into the back of another following an abrupt stop.

As the team arrived in Chester it started to become a race against the clock to complete the tour of stations in daylight, but friends and family were there to provide moral support.

Graham said: "Although the pace was still high we were going to struggle with light if we didn′t get a move on.

"The last leg was by far the most satisfying leg. Riding up Victoria Road all together into Stockton Heath nick felt amazing," said Graham.

People can still donate to this challenge at www.justgiving.co.uk/robbo755.

Further details on the COPS charity can be found by visiting their website, http://www.ukcops.org/.