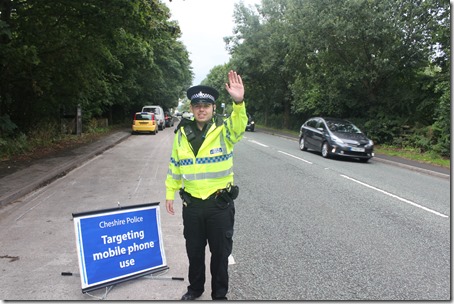 Operation Contender, a Special Constabulary devised roads policing operation, has been heralded a success after it helped to raise public awareness of traffic offences across Cheshire.

The initiative, which was run across the Eastern area on the 17th and 18th August, targeted the use of mobile phones, speeding and other road related offences as identified by officers or by automatic number plate recognition (or ANPR).

Special Chief Inspector Simon Dixon said "When we talk to members of the public, people using mobile phones whilst driving is in the top three complaints.

"With the help of Police Constables, the Special Constabulary has taken proactive measures to improve road safety in Cheshire."

Specials Constable Martin Toner, who has recently completed his training and been through his passing out parade, said: "People have the perception that traffic offences are minor crimes, but they can have serious consequences.

"This is my first traffic operation; by carrying out enforcements such as these, the police are actively doing something to reduce traffic related offences and warning the public that they are not tolerated."

Over forty Special Constables were on duty during the weekend, with incidents ranging from use of mobile phones to driving without insurance and revoked licenses.

And Cheshire Police are calling on more people to ‘Do Something Special’ by joining the Special Constabulary.