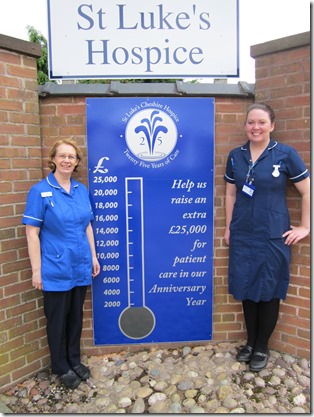 St Luke’s (Cheshire) Hospice is appealing to its supporters to help mark its milestone 25th anniversary in style with a special commemorative £25,000 fundraising campaign.

The Winsford-based hospice, which provides invaluable care across the Mid and South Cheshire community for people suffering from cancer and other life-limiting illnesses, is asking its network of dedicated fundraisers to chip in however they can, be it through simple donations or brand new, daring and quirky challenges.

Anybody can get involved in the £25,000 campaign and help to raise the perfect amount to mark the hospice’s quarter of a century. To add to the fun, the campaign will be monitored with a classic ‘Blue Peter style’ totaliser in the front entrance of the hospice.

The drive will also play a big part in recovering a significant shortfall in anticipated fundraising from the hospice’s ‘Lottery Bumper Silver Anniversary Car Superdraw’, as a result of the Royal Mail’s failure to deliver thousands of the hospice’s anniversary newsletters across the area earlier this year.

More than 131,000 newsletters, containing vital lottery tickets and information, were expected to be delivered to every household in St Luke’s Mid and South Cheshire catchment area, however the hospice received more than 1,000 complaints from upset supporters who did not receive them.

Fundraising from the Lottery competition, one of the hospice’s most high-profile and successful fundraising campaigns, is therefore significantly lower than expected.

With over £6500 a day needed for St Luke’s Cheshire Hospice to open its doors and the majority of that money found through fundraisers, the hospice is urging all its supporters to get behind the new £25,000 campaign and help maintain its invaluable patient care.

St Luke’s Commercial Director Andrea Fragata Ladeira commented: “Reaching this special goal of £25,000 in our 25th year would be a fantastic way to commemorate our milestone.

“We have a network of the most amazing, generous and innovative supporters across Mid and South Cheshire and we are so thankful for their on-going dedication and unrivalled support.

“We are planning to put up a colourful totaliser in the hospice entrance so that every time patients and staff arrive and leave, they will be able to see the progress we’re making together.

“It doesn’t matter if it’s a big quirky event or even the smallest kind donation; every penny will go a long way towards maintaining the care St Luke’s provides for the community.”

If you can help raise funds for St Luke’s and would like for information about how you can support the hospice, call Head of Corporate & Community Development Diane Eeley on 01606 555697, email diane_eeley@stlukes-hospice.co.uk or visit www.stlukes-hospice.co.uk. 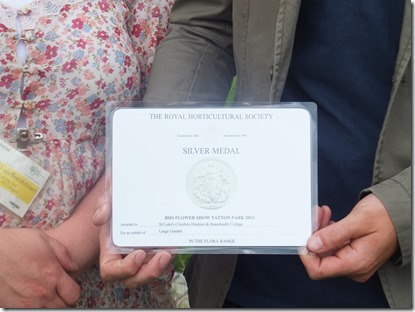 The hospice’s show garden, created to commentate St Luke’s’ 25th anniversary by a team of Foundation Degree Garden and Landscape Design students from Nantwich’s Reaseheath College, was unveiled in the picturesque surrounding of Tatton Park and wowed both the judges and the public from 25-28 July.

The garden, awash with eye-catching colours, was positioned in the show’s ‘Inspire’ zone - an area dedicated to cutting edge design and fresh ideas – and reflected the many positive aspects of St Luke’s, particularly the loyalty and dedication of its volunteers.

The Winsford-based adult hospice has provided invaluable care for people from Mid and South Cheshire suffering from cancer and other life-threatening illnesses since it was formed in 1988. Its longevity is testament to the hard work of its dedicated network of supporters in the community.

St Luke’s Manager of Volunteer Support Sara Evans said: “A Silver medal really is the icing on the cake for what was a wonderful event.

“On behalf of the hospice, I would like to say a big thank you to the wonderfully talented Reaseheath team for all their hard work and to the volunteers who staffed the garden during the show.
“This was a wonderful opportunity for us to put St Luke’s on the map and to mark our 25th anniversary. It was an adventure for us, which we are sure will have many positive spin-offs.
“We are delighted the garden provided a topic for conversation and will be delighted if it has encouraged people to talk more openly about any health fears that they may have.”
The garden was staffed by representatives from St Luke’s every day who also offered complementary therapy treatments in exchange for donations to the hospice.
The garden’s lead designer, Rick Tomlinson, 28, from Sale, runs his own garden business and has just completed his Foundation Degree in Garden and Landscape Design at Reaseheath.
He explained the idea behind the fascinating garden: “Within the garden, a large wildflower meadow landform was broken and inter-planted with harsh architectural grasses, representing the destruction and confusion illness can cause.
“The steeper side of the mound depicted the struggle that people connected to the Hospice go through, and also created a secluded tranquil space to sit and reflect amongst the colourful planting under the shade of the trees.
“Silver roses featured throughout the design, creating accents of reflective light and marking the 25th anniversary of St Luke’s Hospice.”
Rick’s design team was completed by fellow student’s Jess Hughes, Hannah Timmis, Daniel Guy, Josh Croke and Chantelle Pennington.

For more information and pictures of the garden visit www.stlukes-hospice.co.uk/about-us/25th-anniversary/rhs-tatton-show-garden/